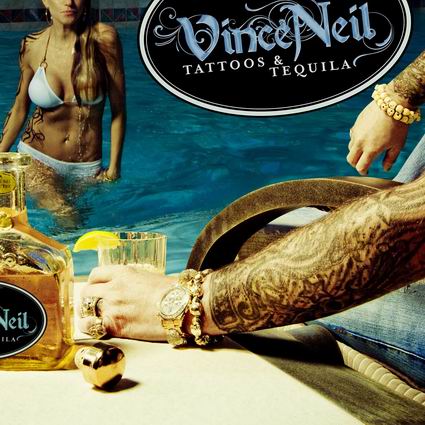 “Tattoos and Tequila” out in Europe on June 4th

anticipated by the digital only release of the title track single on April 16th.

Napoli, April 2010 –  MOTLEY CRUE singer Vince Neil upcoming solo album “Tattoos and Tequila” has been signed by Frontiers Records for release on June 4th in Europe. The album’s title track will be released as a digital download and will be available April 16th in Europe at all digital shops. The music video along with the single was made available for download on www.vinceneil.net earlier this year, but now it can also be seen on the Frontiers Records Youtube channel following this link: http://www.youtube.com/watch?v=3PfWPtAsIF8

Vince Neil recorded the new album in the winter of 2009 together with his band, formed by bassist Dana Strum, guitarist Jeff Blando (both of Slaughter) and drummer Zoltan Chaney. The album will include 2 new songs: “Tattoos and Tequila” and “Another Bad Day” both produced by Marti Frederiksen (Aerosmith, Ozzy Osbourne, Def Leppard etc), plus a selection of classic cuts from some of the Rock giants that have influenced Vince Neil throughout his musical career.  The cover songs were produced by Vince and Jack Blades (Damn Yankees, Night Ranger).

In a recent interview Vince Neil stated: “This album has nothing to do with Motley Crue, Tattoos and Tequila is basically my life” and definitely the new record shows a new, yet familiar side of Vince’s abilities.

“Tattoos and Tequila” tracklisting will include:

As frontman for Mötley Crüe, Vince Neil came to exemplify all things rock and roll: the sound, the look, the outrageous lifestyle. Neil’s unmistakable voice leads some of the greatest rock songs of this generation including “Shout At The Devil,” “Home Sweet Home,” “Girls, Girls, Girls,” “Dr. Feelgood,” “Kickstart My Heart,” “Same Ol Situation,” and the recent “Saints of Los Angeles,” which was nominated for a Grammy Award in early 2009 for Best Hard Rock Performance.

When he is not performing or raising money for charity (the foundation founded as a tribute to Vince’s daughter Skylar whom he lost to cancer in 1995, to date has raised over $2 million to help combat childhood cancer), Neil is also an accomplished businessman overseeing his latest entrepreneurial efforts which include Feelgoods Rock Bar and Grill in West Palm Beach and most recently in Las Vegas; Vince Neil Ink, a Las Vegas based body art shop; Tres Rios tequila and Vince Neil Aviation.