Glam hard rockers LA ROXX for the reissue of their self-titled album released through Steelheart Records.

For the very first time on CD the debut-album of Glam/Street Hard Rockers from Italy LAROXX originally out, only on cassette, in 1992.

-The album was originally recorded for a release in USA and Japan thru a major-label, and a promotional tour in the States (prior of the announced release) was set up, with gigs played at famous “Troubador”, “Foundation Forum” and “F.M. Station” in Los Angeles. Unfortunately things went bad, as the label supposed to release the album suddenly dropped the offer, so the band found itself with a great (and expensive!) album in its hands without a label ready to release it!

-The album has a pure Party-Glam-Street Rock flavour, close to the sound of US bands like Poison, Pretty Boy Floyd and early Motley Crue.

-Fantastic artwork with a de-luxe full colour 16 pages booklet, including pics, memorabilia and lyrics, plus a fully re-mastered sound from the original DAT master-tapes! 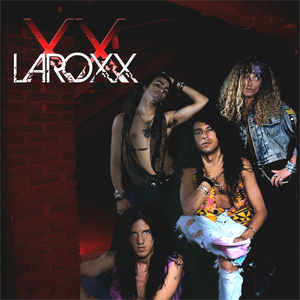