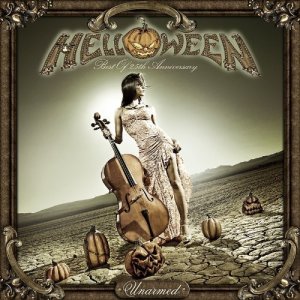 For 25 years, this pioneering Power Metal band originating from Germany, has taken their fans along a journey of 12 studio albums. From Helloween’s legendary 1985 debut, Walls Of Jericho, to their 2007 release, Gambling With The Devil, this important, resilient, multi-talented and influential band has many a song to choose from for their Unarmed, Best Of 25th Anniversary album. One can debate for a year and a day, as to which of their favorite Helloween songs were included or ignored for this milestone album release. Regardless, Unarmed is by far and large, the most grandiose Helloween album ever to have been created.

Usually, upon my hearing the news of a new Helloween album coming up on the Metal horizon, I begin to lick my chops in anticipation of more speed, power and old school Heavy Metal from this incredible band. Well, Metal truth be told, Unarmed is quite the Metal detour for Helloween and their worldwide fan base too. These classic Helloween songs from years long past, have undergone some major changes in their arrangements! Allow me to explain further… an untold number of composers, producers and arrangers all embarked on the restructuring of these 11 Helloween classics heard on Unarmed. Try this on for Metal size – the 70 Piece Prague Philharmonics Orchestra and the London Choir also play a major role in the musical identity of Unarmed!

Certainly, these songs do sound remarkably different, only this detour did not disappoint me one bit. As an old Metal wise man once told me… “change is a good thing”. Still, this is quantum change for any Helloween fans ears to handle upon a first listen to Unarmed. It’s like shifting gears while driving a standard, it’s all about instinct – while accepting such a dramatic musical change of pace. I became instantly aware from the first note of “Dr. Stein”, that I needed to shift my Metal soul into a mellow soul. “Dr. Stein” does play out as a Classic Rock song, now. With similarities to early 1980’s E Street Band, (minus The Boss), “Dr. Stein” is a knee slapping, foot tapping good time… courtesy of the horn section that really adds to the flavor.

As Unarmed plays out, the quality and sum of the musical parts far outweigh any distractions that I may have experienced during several complete listens of Unarmed. The distractions being – where’s the Speed Metal? Hey, this used to be a Power Metal song! And… the ultimate distraction of them all… could I possibly be falling over for this Unarmed version of Helloween? Metal be thy name! Metal as my witness, I have a soft spot in my Metal heart for this Unarmed chapter of Helloween.

For those die-hard Helloween fans that may not absorb musical change with Metal ease… do not despair for you most likely will not be alone. Fans will either love or (gasp) dislike what Helloween has embarked upon here. I just so happen to be an open minded Metalhead that upholds a love for music, thus my appreciation towards such a drastic change by Helloween is not an alarming issue in my Metal world at all.

Truth be told, Helloween has showed me why I have admired them as musicians first and foremost for so many years, their musical transition on Unarmed has been presented upon my ears, with the highest of quality standards and without question… credibility. Helloween loyalists will embrace Unarmed, as for other curious fans out there… don’t be afraid, take a chance on Unarmed, it won’t ruin your Metal soul!

One last interesting note: there is a hidden track on Unarmed! The song title is – “Why”. My question is this, why is “Why” a hidden track? There is absolutely no mention of this song within the liner notes either. An Unarmed, Helloween mystery that may never be explained! 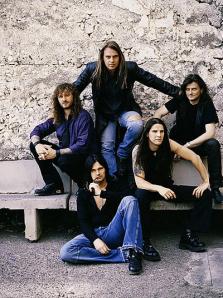