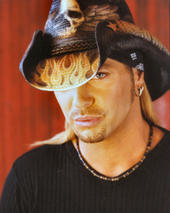 Test results indicate a setback in Bret Michaels condition a side effect from the brain hemorrhage called hyponatremia a lack of sodium in the body which leads to seizures.

Bret Michaels was the topic of Larry King Live as Donald Trump Jr. and other celebrities weigh in on Michaels condition. Due to the severity of his condition, Bret Michaels continues to remain hospitalized in an intensive care unit at an undisclosed hospital. He remains in critical but stable condition according to his doctors.  Last night on Larry King Live Bret Michaels condition was the topic on the show as Donald Trump Jr., Daryl Strawberry, Sanjay Gupta and Carlos Diaz discuss concerns, lasting affects as well Michaels as a person. Donald Trump Jr. stated that “Bret is very likeable guy, down to earth and a solid person.” He stated out of all the people from “Celebrity Apprentice,” I may have had the best kind of off-camera relationship with him over the three years. Trump Jr. also says he is a great father and rocker and concerned for the singer’s health. Strawberry who starred on Celebrity Apprentice with Michaels says he is a good friend on and off camera. He is a hard worker and is a creative force on the show. Without a doubt he lives a crazy lifestyle and he wishes him a speedy recovery. Carlos Diaz who is a Radio Host and Entertainment Correspondent says Michaels is “a star that transcends several generations.” He has reinvented his career, both on “Rock of Love” and “Celebrity Apprentice as well as his music. Dr. Sanjay Gupta is CNN’s chief medical correspondent says a subarachnoid hemorrhage is an aneurysm in one of the blood vessels. He stated about 10 percent of people don’t survive. He obviously survived that. About another quarter of people don’t make it through the first couple of days in the hospital and 30 percent make a full recovery.

Michaels medical workup demonstrated findings of a subarachnoid hemorrhage, a type of stroke that causes bleeding in the fluid-filled spaces around the base of the brain. It presents itself suddenly as the sound of a loud gunshot or thunderclap at the back of the head causing severe cranial pain and muscle spasms. Many people are speculating Michaels head injury suffered from a prop striking the singer at the Tony awards last June is the cause. Additional studies are planned throughout the week to hopefully detect the exact cause of the rupture. Coupled with the fact that Michaels is a lifelong Type 1 diabetic and has recently undergone emergency appendectomy surgery while on tour in San Antonio, he will remain monitored closely by his medical team to make sure no complications occur from the diabetes.

The most common cause of this condition is a spontaneous rupture of a cerebral aneurysm, however 15 to 20 percent of spontaneous episodes of this hemorrhage are found to have no cause. Michaels has undergone a continuous series of tests while in the ICU including angiograms, CT scans, MRI’s and transcranial dopplers (TCD’s). Doctors state Michaels is very lucky as his condition could have been fatal. With further testing and rehabilitation, they are hopeful that Bret will gradually improve as the blood surrounding the brain dissolves and is reabsorbed into his system, which can be a very painful recovery and take several weeks to months. Michaels remains under 24-hour observation in the ICU and is in positive spirits. He is responding well to tests and treatments. Even though today was a minor setback Doctors remain hopeful for a full recovery and plan to release more specific information next Monday.

Thanks for your thoughts, prayers and support!