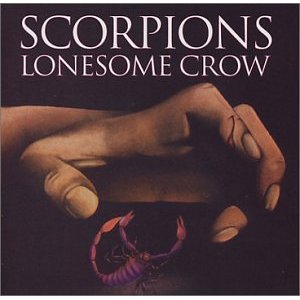 Chances are you have heard the final studio album, Sting in the Tail from the Scorpions by now. Have you ever listened to the Scorpions first studio album?  The Scorpions debut Lonesome Crow was released 38 years ago in 1972 (gasp!).  This album has a sound deeply seated in the seventies, and probably has more in common with bands like Iron Butterfly, Black Sabbath, Jimi Hendrix & Cream.  The music is early progressive rock, and is unlike anything else you will hear in the Scorpions’ discography.  Even as a teenager, Michael Schenker proved to have some incredible guitar skills, although you have NEVER heard him play like this. Klaus Meine’s voice wasn’t as much in the forefront of the music as it is today, but when he does cut loose, you can almost sense a level of greatness within him.  I can’t imagine what the folks who heard this first time in the seventies thought, but this is some trippy, psychedelic music that must be fully listened to, to be appreciated.

If you are the type of person that needs big sing-a-long hits, Lonesome Crow will not be an album for you.  There aren’t any songs on this CD that would translate over to radio play very well.  This CD does however showcase the raw early talent of this amazing band that so many of us have come to love over the years.  Playing Lonesome Crow in 2010 will take you back to an era when rock was still primal, strange and unpolished.  It is a radical beginning for the Scorpions, and is an album that requires multiple listens before you can fully grasp what you are hearing.  Lonesome Crow is a mind-bending masterpiece that ought to be essential to all Michael Schenker fans, and Scorpions die-hards.