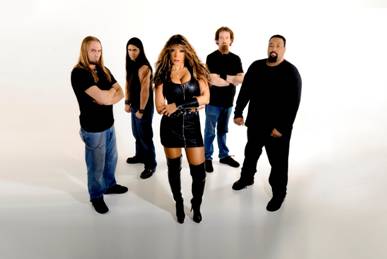 Frontiers Records is pleased to announce the signing of US Classic Heavy Metal band BENEDICTUM for the release of a brand new studio album in early 2011. Since 2005 Benedictum has been heralded as one of metal’s most exciting bands. Fronted by the awesome talent of Veronica Freeman, her raw and powerful vocals have been the driving force behind this international metal sensation.

This year proves to be a very intense and exhilarating time, as Benedictum are set to deliver their 3rd album of jaw dropping, head banging, female-fronted fury. After releasing two critically acclaimed albums (Seasons of Tragedy & Uncreation), produced by internationally renowned producer and bassist Jeff Pilson (Dokken, Dio & Foreigner), Benedictum is back to unleash their career defining release!

Benedictum is ready for the next step: with a new label behind them, they are currently working hard on the recording with Grammy Award winning producer Ryan Greene (Megadeth, F5, MXPX, NOFX). Benedictum is firing on all cylinders!  Veronica is joined once again by lead guitarist extraordinaire, Pete Wells, bassist Chris Shrum, Tony Diaz on keyboards and drummer Mikey Pannone.

Benedictum’s success and legacy have been well documented and the band have already earned their place at the head of the power metal genre. “There is really a feeling of excitement in the air for us, the new material will be another level in our evolution as a band and we have a lot of confidence in our new label Frontiers Records and their willingness to stand with us on our journey!” states Veronica.