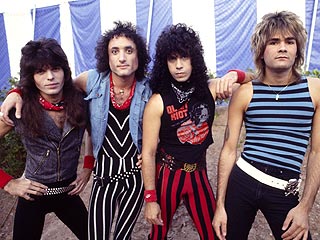 Without a doubt, THE heavy metal success story of the early ’80s was none other than Quiet Riot. After years of struggling in LA clubs (despite legendary guitarist Randy Rhoads being in their ranks throughout the ’70s), the classic QR line-up of Kevin DuBrow (vocals), Frankie Banali (drums), Rudy Sarzo (bass), and Carlos Cavazo (guitar) hit mega-success with their first-ever US release in 1983, the classic ‘Metal Health.’ Spawning two hit singles that have gone on to become synonymous with heavy metal – “Cum On Feel the Noize” and “Metal Health” – the ‘Metal Health’ album went on to become the first-ever metal US debut to hit the #1 spot on the Billboard album charts, and resulted in a solid year of sold-out shows and non-stop MTV video airplay.

Despite this being an absolute standout era of the band’s career, very little substantial video documentation has surfaced. That is…until now. Banali is in the midst of constructing a full-length/behind-the-scenes/warts-and-all documentary about the group (the first-ever solely about QR), which will focus on this aforementioned era, but also, recount QR’s entire story – from the first time DuBrow and Banali crossed paths in January 1980, through DuBrow’s untimely passing in November of 2007.
The video footage – directly from Banali’s archives – will include the aforementioned performance in 1980 through some of the last shows QR played, including footage of their Rocklahoma performance in 2007. Additional video footage captures QR in many phases, including a 1982 performance of “DuBrow” (a short-lived name Quiet Riot went by in the early ’80s), with DuBrow, Banali, bassist Chuck Wright (Sarzo was playing in Ozzy Osbourne’s band at the time), and Cavazo’s first video performance with the band, his second total. Also included will be live performances, backstage footage, sound checks, studio sessions, and interviews – most of which has never been seen.
Banali has already invested money into the project, and to make the documentary reach its full potential, he is having an online fundraiser that ends September 2nd. Fans are being called upon to help back the project, and lend a hand in its completion. Also via the aforementioned link is a list of the different increments you can pledge – all of which give rewards of QR-related merchandise, and as the pledge amount increases, so do the rewards (including such simply awesome items as an autographed QR photo that includes the late DuBrow’s signature, a personal drum lesson with Banali in LA, dinner with Banali at the Rainbow in LA, your own personalized ‘Metal Health’ platinum CD award, your name in the film’s   credits, amongst many other cool opportunities).
As Banali says, “The moment my friend Kevin DuBrow died, my life and career went from sixty to zero with his final breath.” But now, DuBrow and Quiet Riot will receive a much-deserved video retrospective, that will leave no stone unturned. Get ready to bang your head and feel the noize once more!
The first stages of putting the documentary together are now underway, and a “teaser” clip of what to expect has been posted via this link:
http://kck.st/9TXAiA