With eight albums in eleven years, Black Label Society’ has been one of the hardest working bands in heavy metal.  Order of the Black may not offer you too many surprises, but it does have a bunch of kick ass metal that BLS has been known for.

The opening track “Crazy Horse” is about the legendary Native American Crazy Horse, who fought against General Custer at the Battle of Little Big Horn.  This is a ripping track with some cool subject matter. I love the rhythm on this song. The thundering drums and thumping bass is killer. Zakk’s riffs are awesome as well.

According to Zakk Wylde, he broke two blood vessels in his brain singing “Overlord”. Zakk might not be the best vocalist I have ever heard, but you have to have give him credit.  I haven’t heard of another singer singing so hard that he caused himself an injury.  That is as METAL as it gets.  I love the Wah pedal intro on “Overlord”.  I wish it would have been used in the song a little more, but this is still very cool.

“Darkest Days” is the first of three piano based numbers, and is easily my favorite out of the three. (“Time Waits for No One” and “Shall Grave are the other two.)  I love it when Zakk Wylde slows it down, and shows the other side of his talent.  His voice might actually be stronger on the slower numbers than on the heavy ones. If he ever decided to pursue something besides metal music, he certainly has the talent to do so.  I am a fan of his pre-Black Label CD, Pride & Glory, and this style always brings that southern rock style to mind.

If “Darkest Days” was too slow for you, “Black Sunday” is the face melting tune you were waiting for. Heavy riffs are in abundance in this rocker.

Zakk sounds like he stole a killer riff from Tony Iommi on “Southern Dissolution”.  About mid way through this song, their is a guitar lick that is awesome.  I believe Zakk should have built this song around that riff.  This would have been a much better song.  It isn’t bad, but not as catchy as it should be.

If you aren’t headbanging to “Godspeed Hell Bound”, your stereo must be broken.  The double bass drums, and galloping bass rock hard on this song.  This is easily one of my favorites on Order of the Black.

“War of Heaven” has a doom laden song that reminds me a lot of Black Sabbath. After listening to this song a couple of times, I wonder if Zakk Wylde took his inspiration for this song from the “Book of Revelation”. You have to hear the song to understand what I mean.

“Chupacabra” is Zakk Wylde’s answer to Van Halen’s “Spanish Fly”. It is a brief instrumental track that doesn’t really add much to the album. 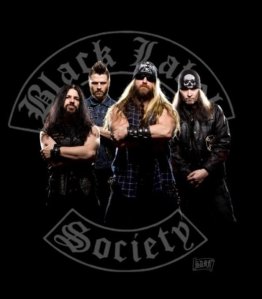