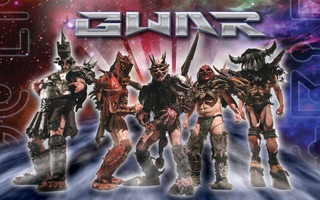 FANGORIA is proud to announce that we will be working with GWAR on their next music video. The song “Zombies, March!” will be the first video from GWAR‘s new album, “GWAR‘s Bloody Pit of Horror”, which will be released on Metal Blade Records on November 9th, 2010. The video will be shot in Richmond, Virginia during September and October.  Expect to see a finished product by late Fall.

FANGORIA‘s own David McKendry will be directing. McKendry (who just finished directing Municipal Waste’s video for “Acid Sentence”) is very excited to be working with this legendary group of monsters. McKendry said, “When a few of the band members approached me about directing the video, I was pretty sure they were going to kill me and take my wallet, or kill my wallet and take me (it was a hard situation to read). But apparently it was legit, and they really want me to direct a video. I had always been a huge fan of GWAR‘s music. Plus the constant threat of being hurled into the jaws of GorGor keeps me on my toes.”

Said infernal overlord and GWAR lead singer Oderus Urungus -“When I found out we were working with FANGORIA on our new video, I immediately sacrificed 50 Norwegian babies on my Burning Altar of Syphilis. This has led to a huge reaction from the undead community; I mean they were literally coming through the walls! Indeed, I think we are going to have to have some kind of zombie try-outs…I don’t want to be stuck with mostly old people and o.d.s. We are going for some real variety and everything from fresh abortions to chain-gunned Taliban members will be appearing!”

For the no doubt disturbing video, FANGORIA will be recruiting around 75 zombie extras from the Richmond, Virginia/Washington DC area. Keep checking FANGORIA.com for more details. “I love working with the undead,” said GWAR bass player and sexual sadist Beefcake the Mighty, “as long as the catering is adequate.”

For all you zombies, GWAR is currently celebrating their 25th year of re-awakened horror amongst the miserable inhabitants of planet Earth, and their continued alliance Metal Blade Records. Keep up with GWAR and Metal Blade at www.gwar.net for all the latest GWAR news, sightings, Zombie auditions, and more!

FANGORIA ENTERTAINMENT– FANGORIA sliced its way onto the scene in 1979, becoming the only national publication devoted to the modern horror genre. Three decades later, FANGORIA is still the number one authority on all things scary! FANGORIA provides the best in horror entertainment and news coverage including the website, magazine, film production division, comic book division, convention circuit, and TV On-Demand Channel. FANGORIA ENTERTAINMENT: We know what scares you!

Catch GWAR on the “Bloody Tour Of Horror”, with The Casualties, Infernaeon and Mobile Deathcamp:

NO SLEEP TIL… FESTIVAL AUSTRALIA AND NEW ZEALAND

FOR MORE INFO ON THE FESTIVAL VISIT: HTTP://WWW.NOSLEEPTIL.COM.AU/