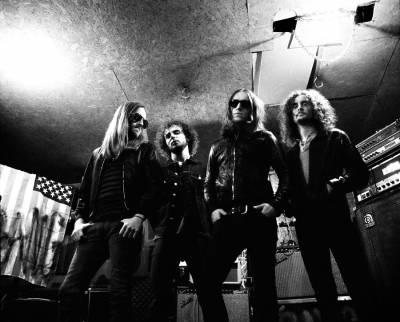 After touring all summer, American Bang will continue on the road for a fall trek in support of their self-titled major label debut, which was released by Reprise Records. The tour, with The Gracious Few, will see the band through the end of October.

American Bang’s current single, “Whiskey Walk” is in rotation at key radio stations across the country. While their debut single, “Wild & Young” is holding fast at No. 22 at Active Rock after reaching more than 27 million listeners at Active and Alternative Rock formats. American Bang is currently an “Incoming!” artist on the Fuse network, which is hosting a series of behind-the-scenes webisodes on Fuse.tv. Watch the video for “Whiskey Walk,” which takes place in an abandoned chemical warehouse and captures the band’s explosive stage presence and their ability to rock n’ameri roll.

Make sure to check out the band’s Myspace and Official site for all the latest updates on the guys, and pick up a copy of the debut self-titled album in stores and on iTunes now!

**denotes show with The Gracious Few