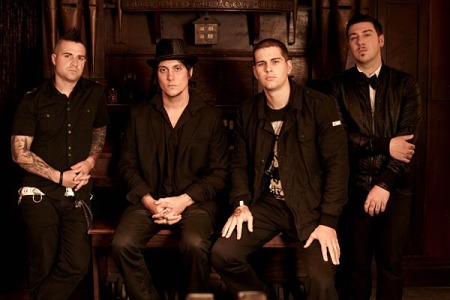 Avenged Sevenfold‘s current single “Nightmare” is the most played song at Media Base Active Rock for 2010. The track has achieved 34,311 spins and is expected to hold the No. 1 position for the rest of the year. The song climbed to No. 1 on the Active Rock chart in August, where it remained for three weeks. “Nightmare” has also enjoyed airplay at Mainstream and Modern Rock radio stations across the country and was the No. 1 Rock Song on iTunes in the U.S. and the U.K. in its debut week.

“Nightmare” is the title track to the band’s highly personal new album, which bowed at No. 1 on Billboard‘s album chart and also topped Billboard‘s Rock, Hard Rock, and Digital charts. Its No. 1 debut is the band’s highest first-week chart position ever.

Produced by Mike Elizondo (Dr. Dre, Eminem) and mixed by noted engineer Andy Wallace, Nightmare was in the works when the band’s beloved drummer, Jimmy “The Rev” Sullivan, passed away. The Los Angeles Times has praised Nightmare‘s “elegiac power ballads,” and called it “the band’s most personal effort yet.” USA Today declared, “A7X has as broad a musical palette as any act in metal, with soaring guitar melodies and sorrowful ballads that offset growling metalcore vocals and Metallica-like jackhammer rhythms.”

Avenged Sevenfold, who recently wound up a stint co-headlining the first annual Rockstar Energy Drink UPROAR Festival with Disturbed, are currently on the road in Europe and the UK. The band will play their last show of the year on December 11th, headlining X107.5’s Holiday Havoc 2010 at The Joint in the Hard Rock Hotel and Casino in Las Vegas.

Read what critics have been saying about Avenged Sevenfold live!

“Their set was easily one of the most impressive performances I’ve seen in a very long time.” — Seattle Post Intelligencer

“The band sounded tighter and more focused than ever.” — Arizona Republic

“Aside from the energy present in singer Shadow’s delivery, the guitar work of Avenged is top notch. Both Zacky Vengeance and Synyster Gates do some mind-bending solos, but more impressively they perfectly harmonize many of the complicated leads” — OC Weekly