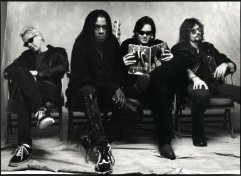 Black Sheep frontman Willie Basse has been added as direct support to George Lynch’s upcoming tour with Lynch Mob throughout January and February. Basse is touring in support of his new single, “Break Away” featuring Lynch on guitars and Scorpions James Kottak on drums, which has been released through iTunes and all digital retailers.

Basse says, “It’s great to work with George again. He’s the hardest working man in rock! I am very excited to be able to support him & Oni Logan in a serious format, while having fun doing what I love. This tour will melt your ass and set the pace for much larger things to come in the near future.”

Basse is best known for his role as bassist/frontman for legendary metalheads Black Sheep, who were mainstays on the Los Angeles Sunset Strip during the ‘80s metal explosion. The band, best known for their technical prowess and precision, has boasted members that include Slash, Paul Gilbert, James Kottak, Randy Castillo and Mitch Perry.