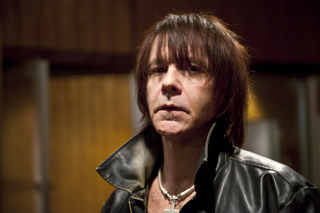 Legendary guitarist BRIAN ROBERTSON recently took some time out to reflect and remember former band mate and friend Gary Moore, who passed away earlier this week.

BRIAN spoke about the recording process of the Thin Lizzy “Nightlife” album and his refusal to re-record Gary’s solos:

“When I first joined Thin Lizzy and we recorded the Nightlife album, there was this track that we had to do, a song called “Still In Love With You”. As it was time to record the guitar solos I refused to replace Gary’s original solos. They were the best solos I’d ever heard at that point and I wouldn’t let anyone talk me into changing that!”

ROBERTSON reflected on just one of his memorable Gary Moore stories:

“In the early days with Lizzy we did a tour of Europe with Colosseum II, which was the band Gary was in at the time, and we did a gig in Arnhem, Holland. Gary came round my room at the hotel after the show with a crate of brandy. Needless to say, we had a great time and we ended up hosing each other down with the fire hoses in the hallway. Unfortunately the fire alarm went off and the whole hotel had to be evacuated. It was a very cheap hotel and it had lots of senior citizens living there, so all of these people had help each other out of the hotel in the middle of the night while Gazza and I stayed in the room and tried to hide. We ended up in the nick for that prank, but it was quickly sorted by our managements”

BRIAN ROBERTSON is set to release his first solo album “Diamonds and Dirt”, on April 5th in North America  on SPV/Steamhammer. The album blends hard rock with definite blues elements and gritty mainstream, wonderfully melodic excellent guitar arrangements. In terms of compositions, the album presents a number of outstanding Robertson numbers, such as the driving title track, the truly intense “Passion”, “Texas Wind” with its wonderfully atmospheric beginning, and the powerful “Devil In My Soul” with its awesome wah-wah guitar solo. The album is rounded off by tracks from Robertson’s extremely successful collaboration with Phil Lynott during their Thin Lizzy days in the years 1974 to 1978 and his fellow-countryman Frankie Miller, with whom he recorded “Dancing in the Rain” in 1986, among others.

07: Devil In My Soul (Brian Robertson)

08: Do It Till We Drop (Drop It) (Frankie Miller/Jeff Barry/Brian Robertson)

Chris Antblad – Piano on “Running Back”

Rob Lamothe – Lead Vocals on “Ain’t Got No Money” (RIVERDOGS)

Ellinor Alm – Backing Vocals on “Ain’t Got No Money”

Håkan Persson – Drums on “Ain’t Got No Money”