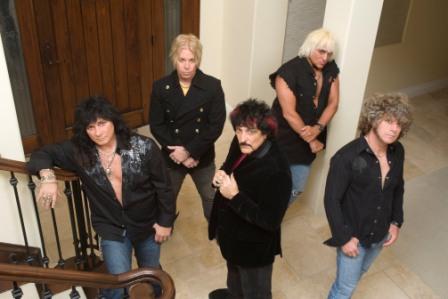 Frontiers Records is excited to announce the release of the Self-Titled come back album from KING KOBRA on April 15th in Europe and May 5th in North America.

The band was featured regularly on MTV and performed the theme song for the #1 1986 motion picture “Iron Eagle“. After disbanding in 1988, each member continued his career in other successful major-label groups – Carmine to Blue Murder (Geffen), Mark Free to Unruly Child (Interscope), Mick Sweda to the BulletBoys (Warner Bros.), Johnny Rod to W.A.S.P. (Capitol/EMI) and David Michael-Philips to Lizzy Borden (Metal Blade).

The year 2010 saw the band reunite the original classic ’85 lineup, replacing original singer Mark Free (now Marcie Free) with veteran lead vocalist Paul Shortino (Rough Cutt, Quiet Riot). “This album captures all the great points we had in the 80’s, but better” says Carmine Appice “The music is more traditional King Kobra music. Great lyrics, kick ass songs with cool hooks and  really good playing. A really great hard rock/metal record with lots of energy”. David Michael-Phillips adds “It truly is an all-star album. Paul Shortino is amazing! I can honestly say he is one of the best vocalists in the business along with being one of the nicest and most generous people I have ever met”.

The band is planning to get on some targeted American and European summer festivals this year. Watch out: King Kobra is smokin’ hot, back stronger than ever and “Ready to Strike” once again!

The new album “King Kobra” will include the following tracks: Rock This House, Turn Up The Good (Times), Live Forever, Tear Down The Walls, This Is How We Roll, Midnight Woman, We Got A Fever, Tope Of The World, You Make It Easy, Cryin’ Turns To Rain, Screamin’ For More, Fade Away.
Weblinks:  www.frontiers.it / www.myspace.com/frontiersrecords www.myspace.com/officialkingkobra