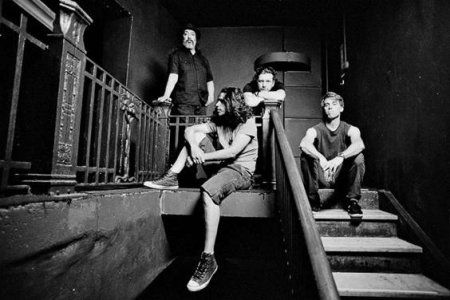 LIVE ON I5 AVAILABLE EVERYWHERE MARCH 22ND VIA A&M/UMe

The year 2010 saw Soundgarden – Chris Cornell, Kim Thayil, Ben Shepherd and Matt Cameron – reuniting after a 13-year absence to a thunderous roar. As promised, the band have now announced that they’ll be releasing their first-ever collection of live tracks on March 22, 2011 through UMe.

Titled Live on I5 – a reference to the Interstate 5 which runs up and down the West Coast-  the new collection compiles live tracks from a 1996 run by the band and captures the band at the height of their recording and touring career.  This carefully selected compilation includes fan favorites like “Spoonman”, “Rusty Cage”,“Burden In My Hand,” and “Black Hole Sun” (performed by Chris Cornell solo), as well what insiders are calling the definitive live performance of “Jesus Christ Pose.”  As a bonus, the disc includes two brilliantly inspired covers:  The Beatles’ “Helter Skelter” and The Stooges’ anarchic proto-punk classic, “Search & Destroy.” The band took out recording engineer, Adam Kasper with them on the West Coast leg of this tour- the first time they ever recorded any live shows. They rented a mobile 24 track machine/truck and recorded the gigs on 2″ tape. Soundgarden had always intended to release it as a live record soon after the tour, but alas, they disbanded and the tapes were left in the closet of Studio X in Seattle (now called Bad Animals) to gather dust until now.

Live on I5 is the follow-up to Soundgarden’s celebrated 2010 reunion, with the band re-staking their well deserved place, earning a Grammy nomination for previously unreleased track “Black Rain” for Best Hard Rock Performance, gracing the covers of music magazines SPIN and Guitar World, performing on the second night of Conan and topping critics’ lists with their fall 2010 release, Telephantasm. The multi-label, career-spanning collection, also available in collector’s editions with the band’s first-ever DVD and booklet,  was a comprehensive retrospective of the enormously influential band whose music put Seattle and a young label called Sub Pop on the map.  As befits a group whose sound redefined a musical generation, they also proved themselves to be innovators with their partnership with Guitar Hero, with 1 million copies of Telephantasm sold, bundled within the launch of Guitar Hero®: Warriors of Rock. The album went platinum before even hitting stores- a first time certification for the RIAA.

Soundgarden’s subsequent live appearances had all the chemistry and intensity fans and critics had hoped for with the band’s legendary heavy sound and power intact.  Their headlining Lollapalooza spot last year found the four members playing their classic material from the ‘90s to longtime fans and a new generation who never thought they’d be lucky enough to see them.  Rolling Stone wrote, “Chris Cornell is the ultimate rock frontman” and Spin said, “The band kicked into an epic set that was the sonic equivalent of a blueprint of the Seattle sound: heavy, loud, and full of metal guitar heroics and classic rock pomp.”

With Live on I5, we catch the now-legendary rock titans at the top of their game. The collection captures the rawness, spontaneity and magic that happens at live gigs between Soundgarden and their audiences.  It cements the band’s place in rock history and shows why their appeal is as strong and as timeless as ever.

Watch this space for additional news on Soundgarden: www.soundgardenworld.com

2. Searching With My Good Eye Closed

7. Burden In My Hand