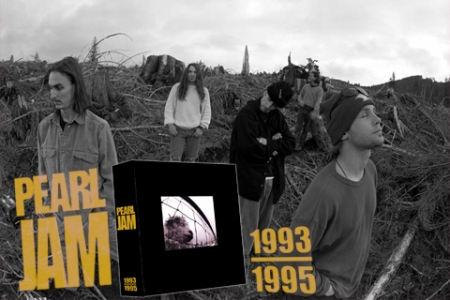 Epic Records and Legacy Recordings will celebrate Pearl Jam’s 20th anniversary with the release of newly restored and expanded editions of Vs. and Vitalogy, the second and third albums from Pearl Jam which broke all initial Soundscan records and secured the band’s reputation as a preeminent force in American rock music.

Vs. and Vitalogy will be available in new Expanded Editions (featured three bonus tracks on each) or together in a three-disc Deluxe Edition (featuring Live at the Orpheum Theater, Boston, April 12, 1994) and Limited Edition Collector’s Box Set, on March 29th. Each album will also be released in new commemorative re-mastered vinyl editions on April 12th to coincide with Record Store Day 2011.

Details on the new reissue formats are as follows:

An epic performance recorded at the tail end of mythic Vs. tour, Live at the Orpheum Theater showcases a dream setlist created especially by the Pearl Jam crew and has for years been one of the most sought-after recordings among serious aficionados. The ultra deluxe boxed set of Vs./Vitalogy will also include an exclusive collector’s cassette featuring live tribute and studio performances from a number of Pearl Jam’s fellow artist friends. Broadcast on January 8, 1995, this recording is part of the legendary Monkeywrench/Self-Pollution Radio series produced by the band.

Both albums will be available on vinyl with bonus tracks