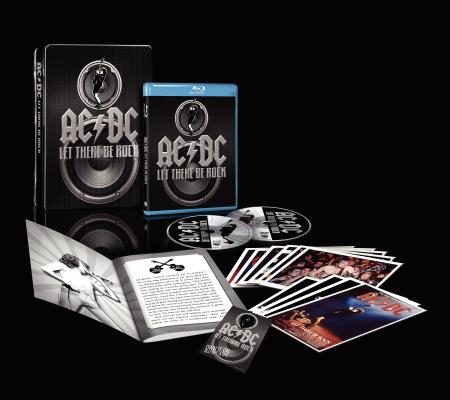 The tragic death of Bon Scott, AC/DC’s flamboyant front-man in early 1980 sent shockwaves throughout the rock music community.  At the time no one could imagine a 1979 Paris concert would be the last filmed live concert of the hallowed singer’s career but he left the stage that night with the rest of the band leaving it all out there as he had done so many times before for millions of fans. Now for the first time ever on Blu-ray and DVD, Warner Home Video (WHV) is getting set to celebrate one of the greatest performers and legendary rock bands of all-time by releasing AC/DC – Let There Be Rock on June 7, 2011 to commemorate the 30th Anniversary of the theatrical release.  This legendary concert film showcases the power and precision the group brought to the stage that night during the Australian hard rock band’s “Highway To Hell” tour.  AC/DC: Let There Be Rock DVD will be available for $21.95 SRP and AC/DC: Let There Be Rock: Limited
Collector’s Edition will be available on DVD for $39.99 SRP and Blu-ray/DVD combo pack for $44.98 SRP. Order due date is May 3, 2011.

AC/DC – Let There Be Rock is fully remastered and available on DVD and Blu-Ray for the first time with all 13 song performances, including classics such as “Whole Lotta Rosie”, “High Voltage”, “Highway To Hell”, and the epic anthem “Let There Be Rock”.  Lead guitarist Angus Young takes center stage in his trademark school-boy uniform and captures the audience with his energetic antics and frenetic solos.  The film contains interview segments and humorous backstage footage of these hard rock pioneers, especially those last interviews with Scott.  This DVD release will be a great opportunity for fans of all ages to relive one of the greatest performances by one of the most decorated rock bands in history.

“AC/DC is one of the most iconic bands in rock music history and WHV is proud to showcase their legendary 1979 Paris concert on Blu-Ray and DVD for the first time ever,” said Rosemary Markson, Vice-President of TV and Special Interest Marketing.  “Warner Home Video is thrilled to bring this incredible show to AC/DC and rock fans, including a special limited collector’s edition version with over an hour of never-before-seen bonus features and much more.”

•    AC/DC: The Bedrock of Riff: No one has mastered the basic DNA of Riff Rock as successfully as AC/DC. Explore Angus and Malcolm Young’s telepathic groove and the four-on-the-floor swing of Phil Rudd.

•    Bon Scott: The Pirate of Rock ‘n’ Roll:  Bon Scott was the ringleader of the AC/DC show, balancing his screaming sexuality with a rakish charm. Get a glimpse into the life of a classic Rock ‘n’ Roll pirate.

•    AC/DC: A Rock Solid Legacy: From bar band to arena rock, AC/DC stuck to their guns and shot their way to the top. Fellow rockers and journalists chart AC/DC’s ascent into the Pantheon of Rock Gods in rock ‘n’ roll history.