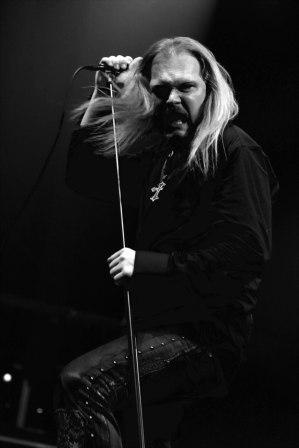 Frontiers Records is pleased to announce the release of JORN’s ultimate Live experience “Live in Black” a 2 CD / DVD recorded focusing on his original repertoire recorded live at the Sweden Rock Festival 201o on August 23rd 2011 in North America and August 26th in Europe.

2010 was a significant year in Jorn’s career. Besides releasing a tribute album to his hero Ronnie James Dio, Jorn was invited to perform, together with Glenn Hughes, with Heaven & Hell on their final concert, at the High Voltage Festival in Victoria Park, London.

Just a few weeks earlier Jorn appeared at the Sweden Rock Festival, in Sölvesborg and blew the crowd of more than 25,000 fans away. “The special thing with “Live in Black” is that it captures a very rough, uncut and spontaneous moment in the bands history” tells Jorn Lande. “It was a hectic day with many interviews and several tv appearances and I also had to do a short speech and statement regarding the great Ronnie James Dio’s untimely passing a few weeks earlier. The whole festival became in the spirit of Ronnie, and it was very moving to see everyone there, including the artists honoring his memory” recalls the Norwegian singer.

A new original Jorn album is already in the works and scheduled for an early 2012 release, but till then Jorn fans can enjoy the pure and epic concert performance of “Live in Black“. You want Jorn and with ”Live In Black” they bring it to you: nothing compromised, modernized or fiddled with!

Check out the trailer for Live in Black below!