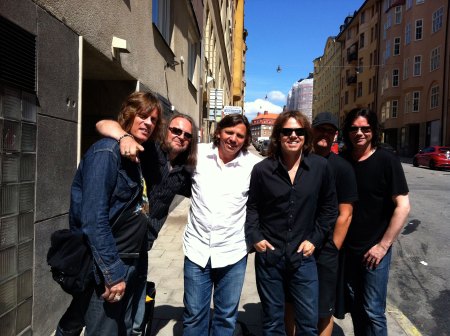 “We still feel we have one hell of a rock record to make” says Europe’s singer Joey Tempest. “Kevin’s the man for the job. We love his work with Bonamassa, Black Country Communion, and Black Stone Cherry. He’s the real deal. We’re ready to do some serious damage.”

Last week Europe met up with Shirley in Stockholm to discuss the direction of the next album. Based on reactions from the fans and media, Europe’s 2009 album ‘Last Look at Eden’ proved to be the band’s most important record since ‘The Final Countdown’.  “I’ve been a big fan of Europe’s work for many years,” says Shirley. “The band is influential and highly underrated. I can’t wait to make the upcoming album their most explosive to date.”

After summer 2011, Europe will finish the promotion of Last Look at Eden tour, and will start to focus their energy on the next album produced by Shirley.  “We’ve toured for one and a half years” adds Tempest. “It’s time to write and record some new songs and get back on the road again in 2012.”

earMUSIC is also about to release a limited deluxe book with pictures be Denis O’Regan. “Live Look At Eden” features exclusive live audio and the stunning performance at last year iTunes Festival in London.  Recording for Europe’s new album begins in Stockholm on October 3rd, for an April 2012 release.