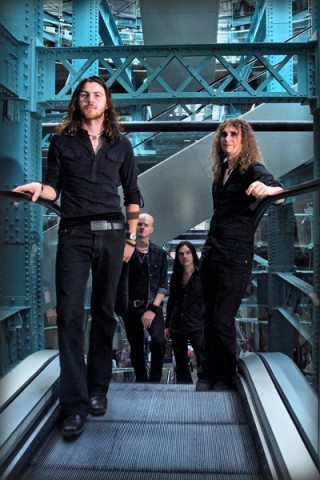 Irish rockers GLYDER have completed work on their fourth studio album, “Backroads To Byzantium”, for an October 11th North American and October 7th European release via SPV/Steamhammer Records. “Backroads to Byzantium” takes the listener on a road trip that has a hint of Americana and progresses to the re-emerging troubles on the streets of Northern Ireland to being homeless on the streets of London. Other themes on the album concern the evils of the tabloid press and global warming. The album ends off in a reflective mood about mortality and how it’s not the end.”

GLYDER’s new singer Jackie Robinson has a unique rock voice that sometimes hints at Paul Rodgers and Phil Mogg. Hailing from Northern Ireland, he was recruited through an ad on the Internet and because the rest of the band is from the South of Ireland, the album was written between Jackie and the two GLYDER guitarists, Bat Kinane and Pete Fisher, over email. Working with some home recording software and a few Gmail accounts, the new GLYDER album took shape over Christmas 2010 and early 2011. The album was recorded in Dublin and mixed in Copenhagen. The stunning artwork was created by Mark Wilkinson.

“This new GLYDER album has i feel my best songwriting and guitar playing to date. I’ve just put everything into this album and I also seem to have found a new confidence in my playing. Pete’s playing is also great and he has some amazing solos.

“You cannot mistake that this is a great guitar album, but the songwriting I feel is top-notch, too. Jackie, the new singer, really has a quality set of pipes and that makes it very exciting.

“I like the fact that we used all the modern technology available to us to write the album because Jackie lives 200 miles away. It’s very much a classic rock-sounding album, but it was written and recorded in a way that could have not been done thirty years ago.

“I know in my heart we have done something very special on this album and I’m very proud to be in this band.”

Some older GLYDER tracks with the new singer Jackie Robinson can be heard on www.reverbnation.com/glyder

GLYDER have released three albums and have opened for the likes of Metallica, Slash, Dio, Thin Lizzy, Michael Schenker, Mötley Crüe, Blue Oyster Cult. They have headlined in Spain and their own native Ireland as well as headlining to 10.000 rock fans in India.

The band is currently lining up dates for festivals in Ireland during the summer and doing some dates with Y+T in Ireland in October.