In 2011, Eagle Rock Entertainment has released not one, but all three of the Deep Purple CDs with the Mark I lineup. Deep Purple’s self titled album was the least successful album of the Mark I lineup.  The end result was the band shifting to a heavier sound, and eventual joining of Ian Gillan and Roger Glover.

The lack of chart success is by no means a reason to not check this CD out.  There are a bunch of interesting moments such as the epic twelve-plus minute song “April”, the rockin’ psychedelic jams of, “The Painter”, “Why Didn’t Rosemary?” and “Bird Has Flown”, plus the original released single “Emmaretta”.

If you like bonus tracks, this re-issue has four of them to sink your ears on. You get three versions as originally performed on the BBC, the other is a B-side version of the song “The Bird Has Flown” that was originally found on the B-side of the “Emaretta” single.

If you are a rock fan that loves to hear deep cuts from bands that rarely ever get radio play, you are going to love this album.  The self titled album may have caused changes in the Deep Purple lineup, but it is interesting listen, and one should be in every Deep Purple fan’s collection. 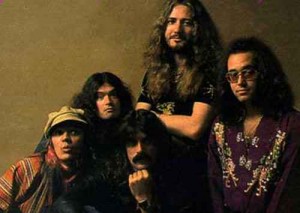