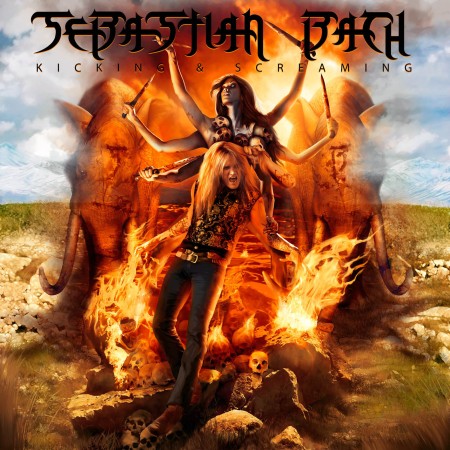 Sebastian Bach is back with a new album, a new(er) band, and a whole new attitude. Fans expecting to hear a new incarnation of hair metal should keep on walking. This is new Bach, and it is highly transformed from old Bach.

The first exceptionally noticeable trait on Sebastian Bach’s latest CD, Kicking And Screaming is how unique the sound is when compared to past Bach. While Sebastian mentioned in several interviews that the new disc was going to be decidedly different from anything he’s previously recorded, it’s hard to know what that means until actually hearing the disc. Bach was not kidding. Fans purchasing Kicking And Screaming hoping to hear regurgitated hair metal from days gone by are in for a big disappointment. Kicking And Screaming is a Sebastian Bach solo record like none that has been heard before and that is great news for metal fans.

Bach’s voice has changed for this release. Known for his primal metal screams and magnificent yowls that ruled the hairspray rock back in the day, Bach has followed more of a modern trend for Kicking And Screaming. The yodeling has been pushed aside for more of an alternative rock sound. Blend together the sounds of Seether, Three Days Grace, Shinedown, Soundgarden, and a lot of London LeGrand, and the end result will be Bach’s voice on Kicking And Screaming. It’s neither a good thing nor a bad thing, but it is different. So different that it is immediately noticeable and after a couple of spins through the disc, it’s likeable. The lengths that Bach went to be more than a cliché of his former self shows and it is a welcome breath of fresh air.

After seeing Sebastian Bach live at this year’s M3 Festival, I knew that young guitar wizard, Nick Sterling, was an exceptional talent. However, once I heard his work on Kicking And Screaming I was reminded of Steve Vai on David Lee Roth’s Yankee Rose. Sterling is close to being that elite and his chops on the album are astonishing. Layered with intense solos and spectacular finger picking, Nick Sterling is every bit as good as Sebastian Bach proclaimed him to be. As lead guitarist for Bach’s band, he provides a fresh and invigorating style of guitar that brings out the best in each song. Nick Sterling is the future sound of hard rocking guitarists, and if he keeps up this great work, he is going to be remembered forever. Like Johnny Lang and Kenny Wayne Shepherd before him, this young superstar can be the next IT guitarist. Let’s just hope he keeps his head on straight and doesn’t fade away into the fold.

Overall, if you are seeking a great hard rock album with a modern spike, purchase a copy of Kicking And Screaming. However, if you are looking for old school Bach ala the Skid Row days, you might want to take a pass. There is no Aqua Net required to enjoy this album.

Notable Tracks: Dance On Your Grave, Long As I Got The Music, Dream Forever