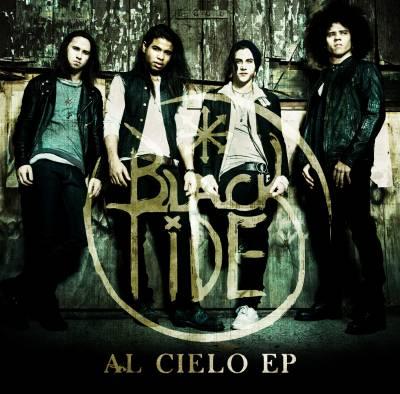 Fresh off the 2011 UPROAR TOUR, Miami-based hard rock group Black Tide has released Al Cielo, a Spanish language EP featuring three songs from their latest DGC/Interscope Records release, Post Mortem. Re-recorded versions of “Let It Out,” “That Fire,” and “Into The Sky” make up the EP as “Déjalo Salir,” “That Fire (Español),” and title track “Al Cielo.” Fans can preview and download the tracks on Black Tide’s Facebook page, or on iTunes now.

Also brand new from Black Tide is the second installment of their Twitter-fueled web-series #DareBlackTide. The band is collecting dares from fans on Twitter, filming themselves going through with them, then posting the videos here: http://www.blacktidemusic.com/dare/completed.aspx. Fans are encouraged to tweet dares using #dareblacktide for a chance to see the band attempt their challenge from the road.

The band is back in Miami this week promoting Al Cielo having just wrapped up nearly two months on the 2011 UPROAR TOUR, concluding with a rousing performance at the two day 48 Hours Festival in Las Vegas. The massive active rock tour featured genre heavyweights Avenged Sevenfold, Bullet For My Valentine, Seether, Escape the Fate and more. Black Tide kicks off a run through the Midwest and South with Halestorm and others starting November 18th. Full dates are below, including just announced stops in Indiana, Illinois, and Louisiana.