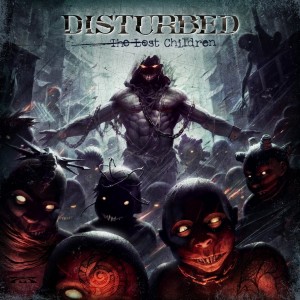 After a decade of music, and five albums to their credit, Disturbed has amassed a good bunch of “b-sides”, rarities, cover tunes. The band has finally put them all on one album, The Lost Children,  for their fans to enjoy.

Some of the songs on The Lost Children are better than the majority of the tunes on Disturbed’s previous release, Asylum, but some I can also see why some tunes were b-sides.

The album opener “Hell” is pretty good, and one of the better tunes on the album.  I could live the rest of my life without hearing “A Welcome Burden” again. This former b-side from The Sickness probably should have stayed in the Disturbed vaults. “This Moment” was originally on the CD, Transformers: The Album.  It is a solid tune, but not one of my favorites.

“Run” and “Parasite” are both b-sides from my favorite Disturbed album, Indestructible.  Both songs have that classic Disturbed sound with with David Draiman’s chant like vocal delivery.

The album’s only unreleased tune “Mine” has a creepy intro that would be right at home in a Saw movie. It is an interesting listen with its intertwined news audio clips. I completely understand why this wasn’t released before now though.  It just doesn’t seem to fit in with Disturbed’s previous releases.

The Lost Children concludes with two back to back cover tunes.  Disturbed blasts out faithful versions of Faith No More’s “Midlife Crisis” and Judas Priest’s “Living After Midnight”.  They do a good job on both songs, but don’t really add any Disturbedism’s to the songs.

With Disturbed taking a well deserved break in their touring and recording schedule, The Lost Children may be the last Disturbed release to hit the streets for a few years.

The Lost Children stands up as a decent follow up to Asylum, and is worth picking up if you are one of the Disturbed.