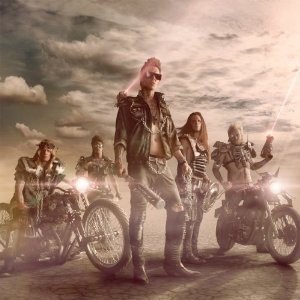 Hair Metal Core...that is how I have heard the band Blessed By A Broken Heart described, and that pretty much fits them perfectly.  On the band’s third album, they have relaxed the metal core vocals, and that is a good thing.  I have never been a fan of the hardcore/metalcore style of vocals.  To me, that style of vocals sounds like Cookie Monster vomiting his cookies, while he tries to spit out a sentence.  I prefer clean vocals, and Feel the Power has more clean vocals than either of Blessed By A Broken Heart’s previous two albums.

From a music perspective, this album is rifftastic!  Blessed By a Broken Heart has crammed as many riff’s as possible on this album.  Shred Sean & Sam Ryder have impressed the heck out of me with their guitar playing on this CD.  Most of the songs on Feel the Power are up tempo, and give off a positive vibe.  The sound varies from the retro 80’s hard rock style, to the more modern guitar offerings of bands like Avenged Sevenfold and Black Tide.

“Shut Up and Rock” features the vocals of Dallas Taylor from Maylene and the Sons of Disaster.  This song is easily one of my favorites on the album.

“I’ve Got You” reinvents the 80’s power ballad, while “Scream It Like You Mean It” and “Forever” (See video below)  might be the most melodic tunes on the album.  All of these songs will likely have appeal to melodic rock fans.

Overall, I enjoyed this album, but I wish the band would lose the metal core vocals.  That is the only thing that held this album back from being a great one.  If you enjoy the clips below, you should give this one a chance.

You can purchase Feel the Power at this link. 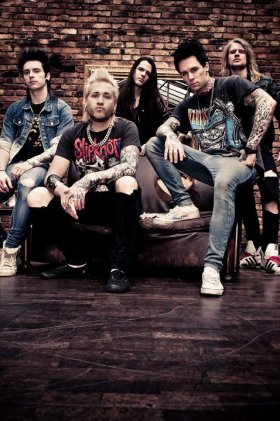 Blessed By a Broken Heart is:

Guest Singer:
Dallas Taylor (Maylene and the Sons of Disaster) (vocals on “Shut Up and Rock”)