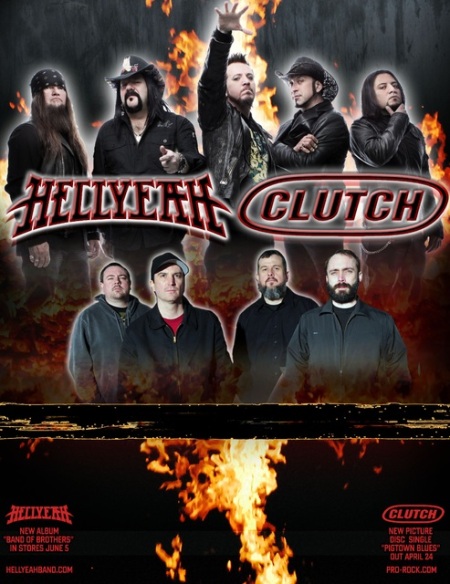 Maryland rockers CLUTCH are teaming up with HELLYEAH for a North American Co-Headlining Tour this Spring. Both bands will play full headlining sets. The tour kicks off April 13th in Providence, RI and runs through May 11th in Joliet, IL. Throughout the tour there will also be dates that feature Clutch only and Hellyeah only as well as radio festivals and shows. A list of complete dates can be found below.

Hard rock supergroup HELLYEAH is touring in support of their new album Band of Brothers which is scheduled for a June 5th release in North America. The album, the band’s first effort for their new label home, Eleven Seven Music, was recorded in Dallas at drummer Vinnie Paul’s home studio, VP’s Upstairs Studio, and was produced by the band and Jeremy Parker (Godsmack, Evanessence), who also served as engineer.

CLUTCH is hitting the road in support of their double vinyl edition of Blast Tyrant which is being released February 28th via Weathermaker Music. This 180+ gram expanded vinyl contains 16 songs and includes six mini-posters taken straight from Blast Tyrant’s “Atlas of the Invisible World”.   Each illustrated poster is sized (8.5″ x 11″) and depicts one of the various characters featured within the Blast Tyrant storyline.  Prior to February 28th, the double vinyl edition of Blast Tyrant is exclusively available via www.Clutchmerch.com.  CLUTCH will also be releasing a picture disc single of the new track “Pigtown Blues” on April 24th. This is the first new studio material from CLUTCH since 2009’s Strange Cousins From the West.

CLUTCH will also be returning to Europe this festival season. The band has been confirmed for the Sonisphere Festival in Madrid Spain on May 26th and the Peace and Love Festival in Borlänge, Sweden on June 29th. Additional festival appearances are expected to be confirmed in the coming weeks.

In other CLUTCH news, the band’s music will be featured in the soon to be released film “The Baytown Disco” starring Andre Braugher, Billy Bob Thornton, and Eva Longoria.  A six minute preview of the film can, featuring CLUTCH music can be viewed HERE. And for all you hockey fans, CLUTCH‘s “Electric Worry” is still the goal music for the Vancouver Canucks. Check it out HERE.