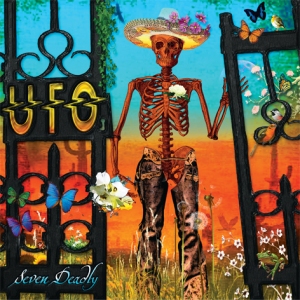 Most Hard Rock enthusiasts would agree that it is the presence of a guitar solo that truly defines whether a song should be considered Hard Rock. Should that definition be used as a litmus test to what is or isn’t Hard Rock, then UFO has passed with flying colors. The most enjoyable part of their new disc, Seven Deadly, is the fact that every song gets a guitar solo — rock, the way it ought to be!

It never ceases to amaze me how musicians like UFO that have been around for such a long time can still put out poignant, high quality music for the masses. UFO’s debut album came out in 1970 and they’ve been rocking the world ever since. Seven Deadly is the band’s 22nd record, and while there have been numerous upon numerous lineup changes, original members Phil Mogg and Andy Parker are part of the latest disc.

Combining southern rock, blues, a twinge of 80s metal, and hard riffs, UFO has created an outstanding record that both longtime fans and “Johnny-come-lately” are going to be ecstatic about. The creative outpouring on Seven Deadly is attributable to the band’s veteran dedication to their craft. After 22 albums, one might think the band would decide to rest on their laurels, or release some sub-par material that had been sitting around for years, not making it on other albums. That is definitely not the case with Seven Deadly. UFO proves they still have what it takes and that nothing less than the best will do for the band and their fans.

“Fight Night” kicks the record off in style and immediately brings forth the hard rocking, bluesy sound of UFO. Guitarist Vinne Moore immediately establishes himself as an amazing lead guitarist and the centerpiece of the magnificent music that is bursting from the speakers.

Phil Mogg’s voice has held up well over the years. That is most evident on the track “Angel Station.” This is the slower, prerequisite ballad of the disc, but it is performed with passion and power. Mogg can still hit the high notes and sing with such clarity that it’s hard to believe his age. “Angel Station” is a brilliant song that moves the listener. Mogg does an incredible service to the vocals on this song and the finished piece is proof of his ability with the microphone.

Not enough great things can be said about lead guitarist Vinnie Moore. His best solo comes on the track “The Last Stone Rider.” Combining blues, metal, and finger picking at its best, Vinnie Moore shows some great, flashy techniques with the axe in his hand. His guitar playing prowess is evident all over Seven Deadly and one of the best treats of the album. If you are not a fan of Vinnie Moore, you will be after listening to Seven Deadly” His guitar work takes the album from great to outstanding.

Album closer, “Waving Goodbye,” is a perfect way to end such an esteemed album. A bluesy, ballad that contains another magnificent Moore solo and passionately sung lyrics, this is one of the best songs contained on Seven Deadly and it is worthy of multiple listens. If ever there was a song to add to the joys of summer playlist, “Waving Goodbye” is it.

If you’re seeking new rock from a classic artist that sounds as grand as ever, Seven Deadly by UFO is an album for you. The brilliance of the music and the magnificence of Vinnie Moore make it a record worthy of adding to the collection. UFO has struck gold once again.