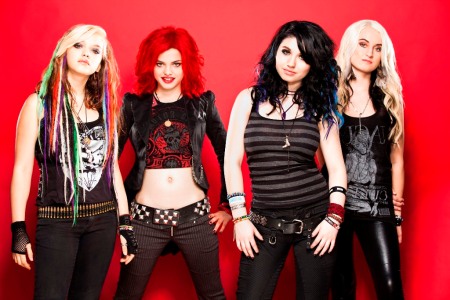 All female, teenage rock band Cherri Bomb are exploding on to the scene with their upcoming debut album, This Is Out of Control. The Los Angeles based group (managed by ex-Hole drummer Samantha Maloney) are now exclusively streaming album track, “Raw. Real.,” over at AltPress.com. The track is also available for free download on the band’s official site.

Cherri Bomb recently unveiled the track listing for the album (below), which will be available May 15th on Hollywood Records. In support of the release – and with many performances at major festivals across Europe and Australia already on their resume – the band will be heading to Asbury Park, New Jersey on May 19th to play The Bamboozle Festival alongside Foo Fighters, Blink 182, and Bon Jovi.

Be sure to check out the official video for the band’s song “Let It Go,” and keep an eye on www.cherribombband.com for all of the latest news as well as their Facebook and Twitter pages.