The love and passion for their music has never faltered. Re-charged and re-focused, Great White channels their raw, sweet and all-at-once dangerous sound into their soon-to-be released collection. Set to come out May 18, 2012 in Europe and May 22nd in North America from Frontiers Records, “Elation” is the band’s 12th studio album.

Best known for the 1989 smash “Once Bitten, Twice Shy,” Great White’s worldwide sales are approaching 10 million. Their song arsenal also includes “Rock Me,” “Save Your Love,” “The Angel Song,” “Mistabone” and more!

“Elation” is just the recording of what live audiences will see and hear as a band with a new mission. “This is a new birth of the band,” Desbrow says. “I wanted to call the album ‘Tabula Rasa’ which means rebirth, but we went for ‘Elation’ because of the euphoria in the atmosphere. It’s a fresh and healthier start than ever before. I’m like a kid in a candy store.”

Kendall, one of rock’s most notable guitarists, echoed Desbrow’s pure excitement. “The energy in the studio is amazing,” Kendall says. “This is  the most excited I’ve been since I was nine-years-old and got my first guitar. It’s remarkable to be doing our third record with Frontiers Records and to feel the love and support from Serafino and his team. They are truly part of the Great White family.”

Lardie, who also served as “Elation”’s producer, applauded the band’s teamwork in the studio. He was struck by the group’s song writing approach and enthusiasm, and assures fans will embrace the record.

“The difference in this studio experience was simple. Everyone was completely present and contributed to the making of this album. As a producer, I feel my part is to get the best out of each of us and I got better than anyone’s best!”

Look out for Shark Tales – The Tell All Book: 30 years of Rock and Roll and Great White rocking in a city near you in 2012! 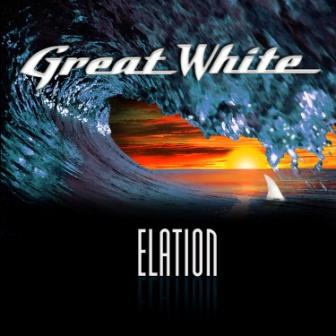 (I’ve Got) Something For You; Feelin’ So Much Better; Love Train; Heart Of A Man; Hard To Say Goodbye; Resolution; Shotgun Willie’s; Promise Land; Lowdown  (Bonus Track); Just For Tonight; Love Is Enough; Complicated.