OVERKILL have debuted a brand new video for their hit single “Electric Rattlesnake” today. Directed by veteran Kevin J. Custer, the video is the first we’ve seen since the band released the “Bring Me The Night” video in 2010.

“Damn, this one BITES hard! Kevin Custer did it again! So plug us in yeah, set us free, this is a thrashing vid the way it’s supposed to be!  Here we go kids ELECTRIC RATTLESNAKE!“ says front man Bobby “Blitz” Ellsworth.

The new OVERKILL record “The Electric Age” has debuted on the BILLBOARD TOP 200 Chart at #73 with approximately 6,700 units sold. To compare, the band’s last release “Ironbound” sold roughly 4,500 copies first week and debuted at #192 making “The Electric Age” the highest charting first week album since their 1994 record “W.F.O.” 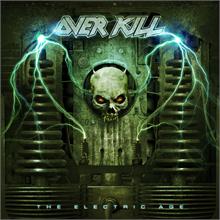 The single comes from their newest record “The Electric Age” which came out last week. If you haven’t had a chance to pick it up, the Amazon MP3 store is has it available for $7.99

“Young bands coming out today that are emulating the ’80s thrash scene should certainly be taking notes from the masters of the genre like Overkill on what it takes to deliver some of the best work of your career over 30 years into it.” – Popblerd.com

“Sixteen albums in, these dudes are not only still fired up; they’re practicing their craft at the peak of their skills, with no signs of slowing down.” – Decibel

In support, the band will head out on the “ELECTRIC AGE TOUR.” Supporting will be GOD FORBID, DIAMOND PLATE and SUDIKARA. Dates will stretch coast to coast and run through April and May, click HERE for up to date ticket information.