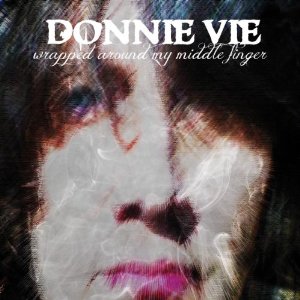 Let’s make one thing perfectly clear — if you are a fan of the harder side of Hard Rock Hideout, you are not going to have any interest in Donnie Vie’s solo effort, Wrapped Around My Middle Finger. That having been said, if you like the softer side of rock once in a while, then this is an album you will fall in love with. Even without his band mates from Enuff Z’Nuff, Donnie Vie has put out some spectacular, haunting, beautiful music.

As he has done for years in Enuff Z’Nuff, Donnie Vie writes sweet, smooth melodies overlaid with beautiful lyrics. On Wrapped Around My Middle Finger Vie tends to lean toward the ballads and moderate tempo songs, but they are so expertly crafted that it is a joy to hear them. While there may not be any cranking guitars or drum solos, there is still impressive, beautiful, melodic music.

Starting with the opening notes of the title track, “Wrapped Around My Middle Finger” sucks you in to hear more. The amazing “Lisa” and hook catchy “Now Ya Know” lead the way in anchoring the album as a solid record.  After a few spins, every listener will find themselves singing along to “Now Ya Know.” “I Won’t Let You Down” is another love song done right. The changes and expert guitar playing mixed in with Vie’s raspy vocals create a fantastic song that is one of the best the album has to offer.

Vie continues to inspire. Even after more than 20 years of song writing, he is still able to craft fresh lyrics blended with perfect harmonies and melodies that never tire. Wrapped Around My Middle Finger is just another example of the great artist Donnie Vie is. If you are a fan of Enuff Z’Nuff’s softer side, exceptional lyrics, or superb soft melodies that are easy to sing along with, then you are going to love Wrapped Around My Middle Finger.