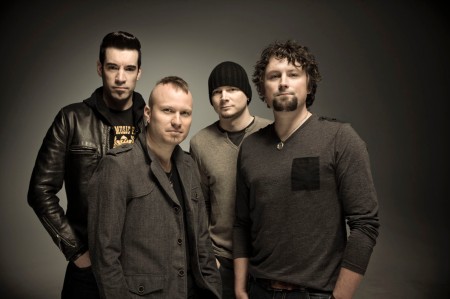 THEORY OF A DEADMAN

HAS TEAMED UP WITH HABITAT FOR HUMANITY

NEW SINGLE “HEAD ABOVE WATER” LANDS AT RADIO THIS WEEK

TOUR CONTINUES IN SUPPORT OF ALBUM ‘THE TRUTH IS…’

THEORY OF A DEADMAN has teamed up with Hollywood for Habitat for Humanity in partnership with Habitat for Humanity of Greater Los Angeles (HFH GLA) to sell $5 bracelets at their shows to benefit the cause and contribute towards a THEORY sponsored Habitat build in the fall. With a goal of eliminating substandard housing worldwide and supporting affordable homeownership, Habitat for Humanity supports this work through donations, volunteer hours and advocacy. The Canadian rockers recently filmed a video to promote this campaign, which you can view here.

“So many people are being affected by the current state of our economy and now more than ever have the need for affordable housing,” states the band. “We thought that it was a great idea to get involved and donate our time and help make a difference by building a house later this year,” explains frontman TYLER CONNOLLY. “The band and I decided to direct our efforts toward helping a family in my Los Angeles community. We’re encouraging fans to pick up a wristband offered at our merch booth this summer. The proceeds will be donated to HFH GLA and help them with their mission of building hope, lives and communities every day.”

THEORY OF A DEADMAN is also offering a couple unique VIP experiences to benefit the charity. Fans can bid now at CharityBuzz for tickets to their 7/21 Biloxi, MS and 7/25 Philadelphia, PA shows including a chance to meet and hang with the band and take home a signed guitar. Bids are being accepted now through Wednesday, July 18 at 3pm EDT here.

In other news, THEORY OF A DEADMAN will release their new single “Head Above Water” to radio later this week. The inspirational track is the fourth single to come from the band’s current album THE TRUTH IS… and features THEORY OF A DEADMAN’s trademark honest and relatable lyrics, hard rock power and soaring pop melody. Their last single “Hurricane” hit Top 5 at Active Rock. In his distinctive tone, frontman TYLER CONNOLLY minces no words in “Hurricane” as he compares a broken romance to a disaster. The official music video, which premiered last week on Loudwire.com, follows CONNOLLY and his girlfriend as she experiences overnight fame and fortune–including an encounter with comedian Andy Dick–and how it affects their relationship. Watch it here.

Always one to poke fun at himself, CONNOLLY recently launched a series of hilarious YouTube videos titled “You Don’t Know Me.” The three-part series which has been viewed over 85,000 times follows CONNOLLY as he asks random people in New York City if they recognize him. Check out Part 1 here, Part 2 here, Part 3 here.

THE TRUTH IS… debuted #8 on Billboard’s Top 200 Albums chart and #2 on iTunes Rock Album charts. The Howard Benson (My Chemical Romance, 3 Doors Down) produced album has sold over 220,000 copies and yielded two other widely successful singles: “Lowlife” was the #1 song at Rock radio for three consecutive weeks while “Bitch Came Back” was Top 15 at Active Rock radio. THEORY OF A DEADMAN—CONNOLLY (Lead Vocals, Lead Guitar), DAVID BRENNER (Rhythm Guitar), DEAN BACK (Bass) and JOEY DANDENEAU (Drums)–has sent 16 songs into the Top 25 on various charts, including three #1s. Their last album Scars & Souvenirs (2008) has reached Platinum status, selling over 1 million copies.

Catch THEORY OF A DEADMAN on the road this summer:

Habitat For Humanity Theory of a Deadman
Leave A Comment   ↓