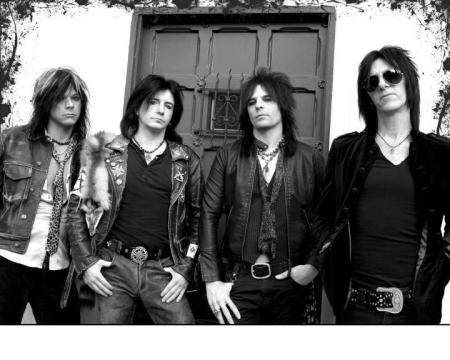 L.A. Guns continues to tour the U.S. and Europe in support of the critically-acclaimed new record, HOLLYWOOD FOREVER (Cleopatra Records). The 14-track album, available now in-stores, online, and on vinyl, includes the charting single “You Better Not Love Me.” Former L.A. Guns member Kelly Nickels makes a special appearance, playing bass on “Venus Bomb” and providing backing vocals on other tracks. Another highlight of HOLLYWOOD FOREVER is “ArañaNegra,” which is sung entirely in Spanish. The album is the fourth L.A. Guns record produced by Andy Johns (Led Zeppelin, Rolling Stones, Van Halen).

This week, the band starts a Scandinavian tour. Current dates through the summer include:

Recently, former L.A. Guns member Tracii Guns, reported that he is retiring his version of the band. All the members of L.A. Guns (Phil Lewis, Steve Riley, Stacey Blades, and Scotty Griffin) believe this will help everyone to move on from the past, from the confusion, and wish Tracii all the best in the future.