Virtuoso guitarist and visionary composer www.Vai.com will release The Story of Light, a new solo album of original material, on August 14. The title comes out on Favored Nations Entertainment, the label Vai founded in 1999. Its sprawling and expressive 12-song set continues a conceptual and cosmic narrative arc begun on the artist’s acclaimed 2005 album Real Illusions: Reflections (also Vai’s most recent solo studio release).

Although The Story of Light is largely instrumental, the album does feature guest vocalists including singer-songwriter Aimee Mann—dueting with Vai on “No More Amsterdam,” which she also co-wrote—and Beverly McClellan, a season one finalist on The Voice. McClellan appears on “John the Revelator,” a track inspired by a vintage recording of blues singer Blind Willie Johnson, whose acid-soaked vocals are in the mix as well. Other highlights include the title track (which opens the album), “Gravity Storm,” “The Moon and I,” and “Velorum.”

Throughout, three-time GRAMMY-winner Vai’s lead guitar is as lyrically resonant as it is technically masterful, his licks and solos bending sounds and in listeners’ minds in equal measure. The Story of Light follows the journey of a man driven mad by grief, intertwining tragedy, revelation, enlightenment, and redemption.

“I’m always pursuing knowledge, I’m a seeker of spiritual equilibrium—and music is a big part of that,” says Vai. “I’ve been obsessed with these kinds of ideas for years.” Looking ahead, Vai envisions a third set of songs that will unravel the mysteries and reveal truths that swirl through both The Story of Light and Real Illusions: Reflections. The completed trilogy, intended to be cinematic—even operatic—in scope, will include lyrics and narration.

The Story of Light is available as of today for online pre-sale orders. This special pre-sale selection of bundled packages is offered exclusively through Vai’s website, www.Vai.com, where complete details on the products and ordering information are available. Each package includes an instant download of a track from the new album personally selected by Vai, “Gravity Storm.”

Following up the 2009 live album Where The Wild Things Are, The Story of Light, is Vai’s 16th solo effort. In support of its release, Vai will begin a tour of North America on August 15th in Fort Lauderdale Florida, accompanied by his band—who are also featured on the new album: Dave Weiner (guitar), Jeremy Colson (drums), Philip Bynoe (bass), and Deborah Hensen (harp, vocals, keyboards). 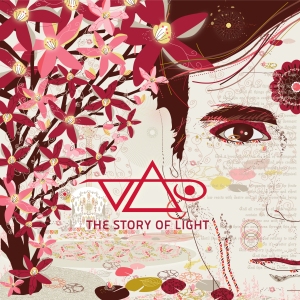 Steve Vai The Story of Light
Leave A Comment   ↓