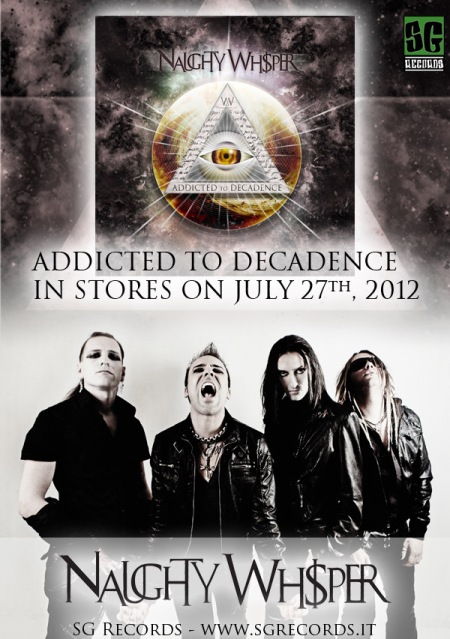 The Naughty Whisper new course starts on July 27 2012 with their new record release ‘Addicted To Decadence’.

During the past ten years, or as Mötley Crüe would say, ‘Decade of Decadence’, Naughty Whisper have released two albums and brought their music all around Europe, lately favoring Scandinavia. The influence of the northern land, the will to update and fellow/godfather Johnny Lee Michaels’s advice (i.e. the hystorical producer of The 69 Eyes), have layed the foundations for ‘Addicted To Decadence’.

Naughty Whisper’s latest release is a mixture of metal, gothic and rock elements, not to mention that Scandinavian air the band has been breathing for years. The album was produced in Göteborg at the Arnold Lindberg’s studio (In Flames,Hardcore Superstar, Evergrey).

And for all fans living in Germany, Switzerland or Austria Amazon.de offers a great 3-days only promotion. Starting this Friday (July 27) and for 3-days only you can get the album for just 5 Euros, simply go to the Addicted To Decadence page on Amazon.de.

U.S. Fans can buy the album as a digital download at Amazon.com.

Check out their clip, “Welcome To My Nightmare” below!

Naughty Whisper Welcome To My Nightmare
Leave A Comment   ↓