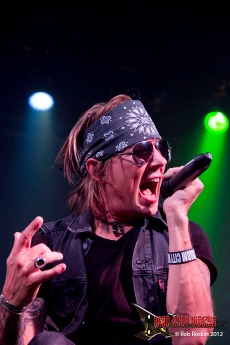 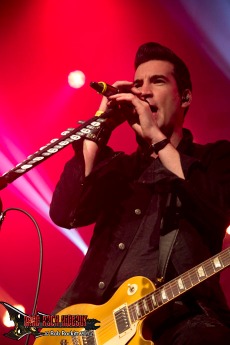 Charm City Devils and Theory of A Deadman closed out the July concert season at Bogart’s in Cincinnati, Ohio on July 29th.

I have loved the band Charm City Devils since I first heard their song “Let’s Rock N Roll” under their old moniker Chosen Son on the Cruefest Compilation CD. The band doesn’t come to Cincinnati often. I believe the 2009 Cruefest was the last time they were here. Needless to say, when they come to town, I make a point to go.

The last couple of times I have seen Charm City Devils perform, I thought they were great, but on this particular night in Cincinnati, Ohio, they were the best I had ever seen them. Singer John Allen did an amazing job controlling the crowd.  The band turned in a blistering set of tunes that included their songs “Burn Baby Burn”, “Spite”, “Start It Up”, “Love N’ War”, “Devil Is A Woman”, “Best of the Worst”, “True Love”, “I Got Mine (The Black Keys Cover)”, “Unstoppable”, “Man of Constant Sorrow” and “Let’s Rock N Roll”.  If you get a chance to see them live, you should definitely go.  You will not be disappointed.  You can grab their newly released CD, Sins at Amazon.com.

I have to admit that I have been pretty tough on Theory of a Deadman in the past.  Their live shows in the past have been somewhat of a let down to me. This was not the case at their Cincinnati show at all.  The band made me eat crow, and I am ok with that. The band brought their “A” game to Cincinnati.

Tyler Connolly was interacting with the packed house at Bogart’s all night.  The band was tight and sounded great.  They did part of their set acoustically,  while sitting on bar stools on the stage.  It brought the old MTV Unplugged show to mind. I thought it was a very cool part of their show, and was a nice surprise.  Theory of a Deadman performed their songs “Got It Made”, “So Happy”, “All or Nothing”, “Bitch Came Back”, “Gentleman”, “Nothing Could Come Between Us”, “Not Meant To Be”, “Truth Is”, “Out of My Head”, “Easy To Love You”, “Better Off” and “Low Life”.  I am glad that I got to see Theory of a Deadman again, and won’t hesitate to do so in the future.

It was a fun night of rock and roll in Cincinnati.  I will be looking forward to seeing Charm City Devils and Theory of A Deadman again in the future!