The centerpiece of the album is the 9-minute sci-fi themed title track.  Guitarist and composer Josh Schwartz describes the track as “a high octane headbanger with an unforgettable riff and an engaging story.  Stylistically it’s Iron Maiden meets Rush with a bit of Meatloaf thrown in for bombast.”  The tale begun in the lyrics is expanded in a short story by drummer Chris Haren, available in the limited box set edition of Time’s Arrow.

On August 20, 2012 A Sound of Thunder started a Kickstarter.com fundraiser campaign for the recording of Time’s Arrow.  The campaign will run for 30 days and offers fans a chance to pre-order the album, have their name printed in the album booklet, reserve an ultra-limited box set edition of the album, and acquire unique and rare items from the band.  Video at the band’s Kickstarter page contains the first clips from the new album.  The Kickstarter campaign can be found here.

The band has also announced a second new release, the Queen of Hell EP, due out in November.  Also recorded at Assembly Line Studios with producer Kevin “131” Gutierrez, the Queen of Hell EP contains four new tracks and is only available via the band’s Kickstarter campaign. 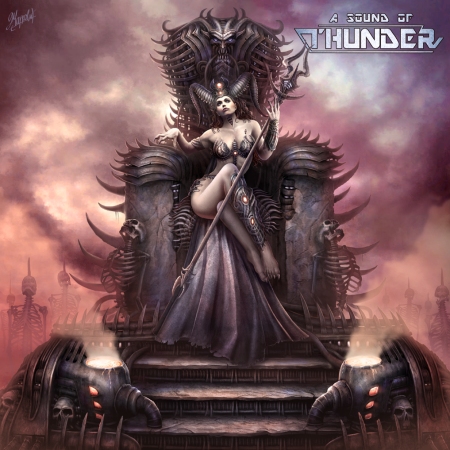 “The Queen of Hell” track-listing:

01. The Queen of Hell (album version)

“The Queen of Hell” is available exclusively as a reward for donors to the band’s Kickstarter campaign.