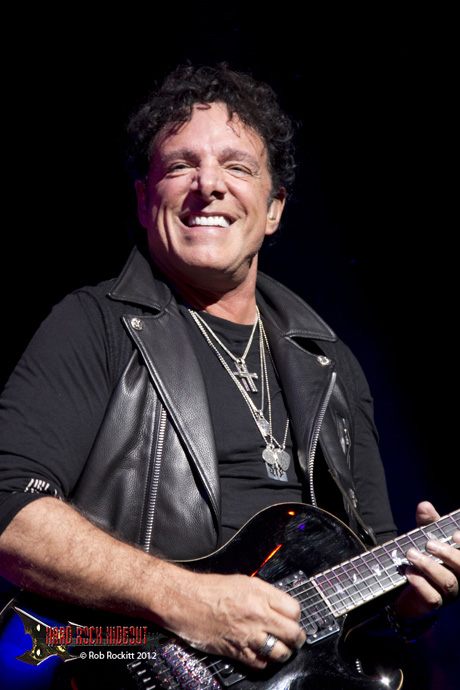 It is hard to believe that the summer concert season is already over at the Riverbend Music Center. It seems as soon as the last note was played by Journey, the colder weather started setting in.

The 15,000 or so fans that came out for the Loverboy, Pat Benatar and Journey concert may have seen the last show of the summer, but it was a great night of rock.

The amazing thing about this show is how good all bands sounded. I have seen Loverboy a few times over the years, and they have always put on a very good show.  The band still sounds exactly the same.  I loved their set, and it was good to see them back on the big stage again.

It is hard to believe that 2012 is the first year that I have seen Pat Benatar live.  I didn’t know what to expect from Pat & company.  Much to my surprise, Pat’s voice is still incredibly strong.  She still sounds great live.  It was cool to see her perform her big hits live for the very first time.

Journey was by far the class act of the evening.  It was the first time I have been able to see Journey live with their current singer Arnel Pineda.  I have always thought that Arnel’s voice was by far the closest to Steve Perry’s than any other of Journey’s former singers.  To experience Journey with Arnel on vocals live was truly special. This little man with the big voice truly put on a great show.  He does a great job fronting Journey, and their show was definitely one of my favorites of 2012.   Journey’s set included the songs: “Faith In the Heartland”, “Anyway You Want It”, “Ask The Lonely”, “Only the Young”, “Chain Reaction”, “Never Walk Away”, “Anytime”, “Faithfully”, “Stone In Love”, “Lights”, “Open Arms”, “Escape”, “Wheel In the Sky”, “Be Good To Yourself”, “Don’t Stop Believing”, “Separate Ways”, “LA Do Da”, “Lovin’, Touchin,’ Squeezin’ “.