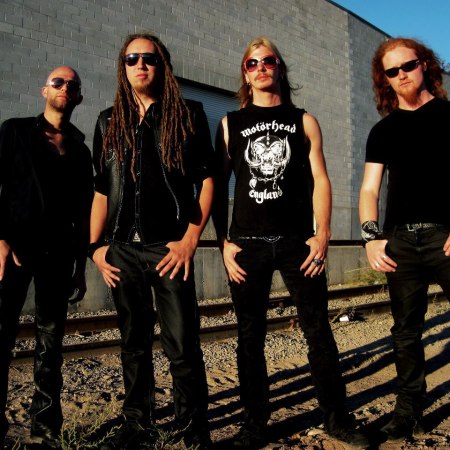 Australia’s latest export, October Rage, has made themselves quite familiar with the United States as they tour the country in support of their debut effort, Outrage.  The quartet teamed up with their friends in Saliva for several dates on this past run, as well as a plethora of solo outings along the way.  “When we hooked up with the Saliva guys, I didn’t know what quite to expect,” says frontman, Nick Roberts. “But it was quickly clear they are an awesome bunch of guys that still rip it up onstage night after night.”
October Rage has been on Stateside soil since July and this is the band’s second trek across the country in that time. Their first run saw the band open dates for both Steel Panther and Sevendust.  “The USA has been a complete blast so far and we can’t wait to see more of this country,” says Roberts.
While in the USA, October Rage has begun the writing process for their second album. “It’s sure to sound a lot bigger, a lot heavier and feature some great songs to let loose when it comes to showtime,” says singer, Nick Roberts.
October Rage’s self released debut, Outrage, is out now.
Upcoming dates:
Nov 01 – Libertyville, IL – Mickey Finn’s (w / Star City Meltdown)
Nov 02 – Battle Creek, MI – Planet Rock
Nov 03 – Rockford, IL – Bar Three
Nov 07 – Lee’s Summit, MO – Jerry’s Bait Shop
Nov 08 – Colorado Springs, CO – The Union Station
Nov 09 – Idaho Falls, ID – The Celt Bar
Nov 10 – Spokane, WA – The Hop
Nov 12 – Seattle, WA – Studio 7
Relevant Links:
www.octoberrage.com
https://www.facebook.com/octoberrage
www.youtube.com/octoberragetv