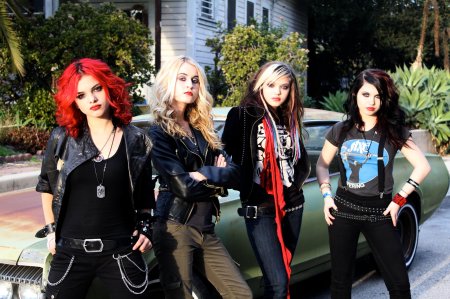 Teen rock sensation Cherri Bomb has released a new video “Too Many Faces”. The video clip was shot in Los Angeles and directed by Lisa Mann (Apocalyptica, The Used).

“Too Many Faces” is the first single from Cherri Bomb’s full-length debut album, THIS IS THE END OF CONTROL, the disc Revolver Magazine called “a defiant blast of teenage rebellion that suggests a cross between Halestorm and the Foo Fighters.”

Though the girls’ ages range from 14 to 16, their album is the product of years of work. It begins with guitarist/vocalist Julia Pierce, who found her musical calling when she was very young. Her talent was undeniable, and her commitment was so unwavering that her parents were persuaded to uproot the family and move from New Jersey to Los Angeles – where they believed that she would have more opportunities to pursue her music. “When I got an electric guitar,” she says, “I realized that I wanted and needed to start my own band. I posted ads online and in local music shops around LA, looking for girl musicians my own age who were as passionate about music as I was. At the time it was hard to find girls my age who could even play instruments.”

Once the lineup was solidified (Nia Lovelis on drums, Miranda Miller on guitar and keys, Rena Lovelis on bass), the quartet hit the ground running. Over the course of the past two years, Cherri Bomb opened for a Foo Fighters’ arena show in Germany, performed at all the major European festivals, including Reading, Leeds, Rock En Seine, Oxegen, Highfields and Lowlands, and tore up Australia’s Soundwave festival. They’ve also shared stages with Bush, Staind, Lostprophets, Buckcherry and performed on this year’s Warped Tour. The all-girl rock band from Los Angeles not only held their own, but they won new believers at every stop.

Debut album THIS IS THE END OF CONTROL was released earlier this year. The album includes notable tracks such as “Raw. Real,” “Let It Go,” and “Shake the Ground,” which was also featured on Marvel’s AVENGERS ASSEMBLE movie-inspired soundtrack.

Cherri Bomb Too Many Faces Video
Leave A Comment   ↓