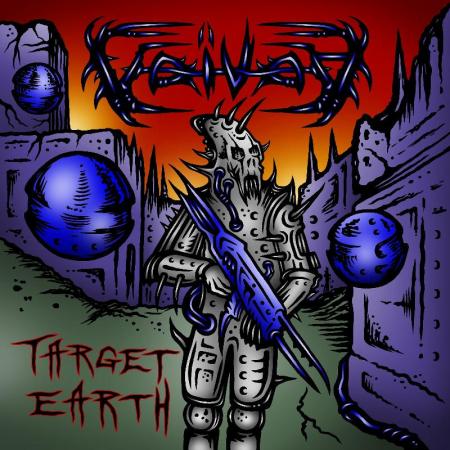 Canadian progressive metal pioneers VOIVOD have now released their 13th studio album, Target Earth! To hear Target Earth in its entirety, please head over to Loudwire.com for the album stream. To purchase Target Earth, please visit iTunes for a digital copy or CM Distro for the album, plus a special bundle that includes the CD and an exclusive t-shirt.

Recorded at producer Pierre Rémillard’s Wild Studios in Quebec and mixed by Sanford Parker (PELICAN, NACHTMYSTIUM), Target Earth features artwork by drummer Away (Michel Langevin), who used color schemes from each one of the band’s previous albums to make this new masterpiece. The album brings back original bass player, Blacky (Jean Yves Thériault), marking his first recordings with the band since 1991’s Angel Rat. It’s also the first to feature guitarist Chewy (Daniel Mongrain), who cut his teeth playing guitar to the late Piggy’s (Denis D’Amour) riffs, and thus has matched his style to a tee. VOIVOD, as a full group, hadn’t sat down to write a record together since 2003’s self-titled album. The end result harkens back to the group’s late 80s output and after 30 years together as a band, one of their best yet.

Read on for a few reviews of VOIVOD’s critically acclaimed Target Earth:

“…the songs have enough complexity, heaviness, and clever arrangements to make ‘Target Earth’ the most riveting VOIVOD album in more than 20 years.” — OUTBURN MAGAZINE (8/10)

“Thirty years in, these Canadian legends are still cranking out vital and ripping tracks…” — BROOKLYN VEGAN.com

“This is VOIVOD back to business with their best record since 1990’s ‘Nothingface.'” — AOL NOISECREEP.com