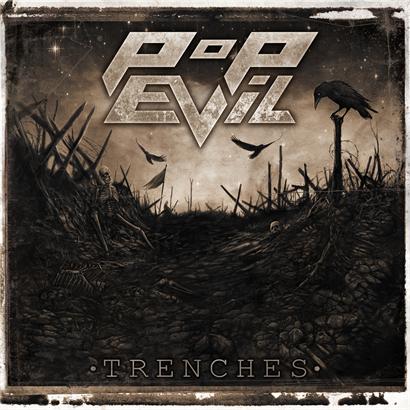 Rock powerhouse, POP EVIL have debuted a brand new single called “Trenches” via their Facebook page. Click the image above or HERE to listen!

The band has been hard at work on their upcoming full length freshly titled “Onyx” due out on May 14, 2013. The message of “Trenches” applies to the world of art as well as the world of sports, the military, or anyone struggling with the economic downturn, like Pop Evil’s home state of Michigan.

“It’s about our battles,” Kakaty says. “Not focusing on the things we can’t control, if we really want to be a band that stands the test of time we have to write the music that connects. We have to dig our way out of the trenches.”

During a slump in the music industry, Pop Evil is living proof that you can still make a living following your dreams. “It’s a matter of time before rock and roll is in the forefront again and we want to be part of that.”

After three Top 5 songs at Rock Radio, a fourth in the Top 10, a half million digital singles sold and over 1,000 shows a few short years into their impressive career, Pop Evil’s return with Onyx is a swaggering, fist­pumping, ball­busting ride through American rock. The grandiose melody of the ‘70s, the danger of the ‘80s, the emotion of the ‘90s and the loudest of modern riffs all have a home in Pop Evil, who fashion a fresh sound that looks to the future through the prism of rock’s past. “Onyx” will be available Tuesday, May 14, 2013.