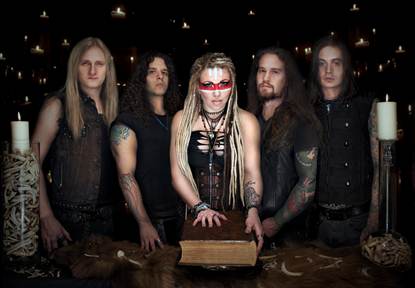 KOBRA AND THE LOTUS MAJOR LABEL DEBUT OUT NOW

Kobra And The Lotus make their major label debut with their self-titled album KOBRA AND THE LOTUS on April 16, 2013, on Simmons Records/T-Boy Records/Universal Music Enterprises (UME).

Formed in 2009 by powerhouse vocalist Kobra Paige, Kobra And The Lotus have been more than busy touring Canada, the UK and Europe extensively with ball-busting hard work and intensity that secured coveted slots at Hellfest, Wacken Open Air, Download and  Bloodstock in 2012.

The life of Kobra Paige and her band Kobra And The Lotus, will be chronicled for the show “Rock City,” airing on Spike TV, Fall 2013. Their 8 episode season will follow the grit, drama, and thrills, both on the road and off, as this emerging metal band takes to the road on their world tour.

For Kobra And The Lotus’ self-titled release, producer Kevin Churko (Rob Zombie, Five Finger Death Punch, Ozzy Osbourne) was brought in to assist delivering precise songs heavy with emotion. The Kobra and The Lotus release has an intentionally grand-scale dynamic, magnifying the glories of the genre and making its mark as ‘arena’ rather than ‘garage’ rock.

The band is co-signed to Gene Simmons’ label – Simmons’ Records. Simmons has a longstanding reputation for discovering, assisting or recognizing new artists like Van Halen. Many of the early artist demos he worked on or helped with have gone on to become multi-platinum records and legendary rock anthems.

Andy Gould, head and curator of T-Boy Records, recognized Kobra’s talent and his newly minted T-Boy Records will serve as the umbrella label for Kobra And The Lotus. T-Boy Records releases new music and albums from established iconic hard-rock bands. Current releases include Rob Zombie’s Venomous Rat Regeneration Vendor (due April 23) and Megadeth’s Super Collider (due June 4). Gould adds, “It’s great to have a fresh act on the label that is carrying on all the best heavy metal traditions.  And of course, it’s fantastic to be in business with Gene [Simmons].”

KOBRA AND THE LOTUS packs a powerful 10-track punch featuring the multi-range wailing vocals of metal hellion Kobra Paige, with infectious harmonies and sweeping choruses over powerful metal riffs, thundering bass and rapid fire percussion. KOBRA AND THE LOTUS contains driving anthems “50 Shades of Evil,” “Welcome To My Funeral,” “My Life” and “Forever One,” more dramatic stylings in “Aria of Karmika,” and they build on tradition with “Nayana” and “No Rest For The Wicked”. The band sets the stage for a tender intimate moment with “Sanctuary” before launching into skull-crushing guitars to carry the track out.

In support of their new album, Kobra And The Lotus will now take on America with an extensive North American tour supporting Fear Factory. The carnage starts April 14 in Colorado Springs, CO winding throughout the U.S. and Canada conquering this continent  one face-melting show at a time.

In short, heavy metal has a New Face. A New Voice. A New Name. Kobra And The Lotus.