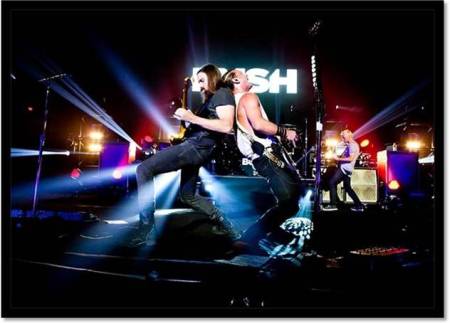 BAND TO PREVIEW NEW MATERIAL ON THE ROAD

Earlier this week, multi-platinum rock band BUSH launched a North American tour with a sold-out show at the Cynthia Woods Mitchell Pavilion in Houston, Texas. The band’s set included two brand-new songs, “This House Is On Fire” and “Loneliness Is A Killer,” both recently written during sessions for their upcoming album, due out later this year. The U.S. tour will be followed by dates overseas, including shows in Russia, London and Vienna, among others (see itinerary below).

BUSH made rock radio history with “The Sound of Winter,” becoming the first band ever to hit No. 1 at Alternative Radio with a self-released single. The song appears on the group’s most recent release, THE SEA OF MEMORIES, which was the first Bush disc to be released via the band’s own imprint, Zuma Rock Records.

“The Sound of Winter” also holds the distinction of being the reunited group’s first No. 1 single since 1999’s chart-topping hit, “The Chemicals Between Us.”

Over the course of their career, Bush has sold more than 16 million albums in the U.S. and Canada alone. They’ve also compiled an amazing string of 15 consecutive Top 40 hit singles on the Modern Rock and Mainstream Rock charts, including 11 that hit the Top 5.  Five of these became No. 1 hits: “Comedown,” “Glycerine,” “Swallowed,” “The Chemicals Between Us” and “The Sound of Winter.” In 2008, Rossdale returned to the top of the charts with his solo single, “Love Remains The Same,” which hit No. 1 on iTunes and generated more than 1.6 million downloads.

Don’t miss your chance to catch BUSH live. Dates are as follows: