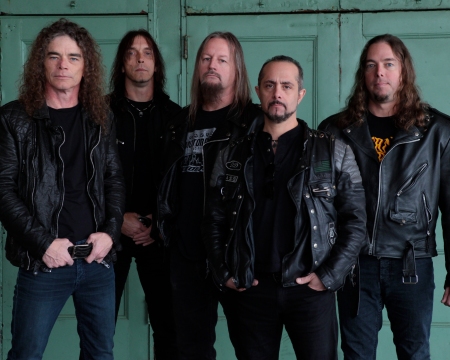 New Jersey thrash legends OVERKILL have announced a co-headlining tour with their Germany’s own, KREATOR. Opening the tour will be California’s WARBRINGER.

Vocalist Bobby “Blitz” Ellsworth comments: “Overkill and Kreator is powerhouse combination, a serious one. Two thrash punch. This is what it’s all about! Hang on, LET’S DO THIS!”

Tickets will be exclusively available through enterthevault.com today, April 30th with general tickets going on sale May 14th.

Dates will span the U.S. coast to coast with select dates in Canada. The tour will end with two nights at Stage 48 in New York City.

The record debuted on the BILLBOARD TOP 200 Chart at #73 with approximately 6,700 units sold. To compare, the band’s prior release “Ironbound” sold roughly 4,500 copies first week and debuted at #192 making “The Electric Age” the highest charting first week album since their 1994 record “W.F.O.”

“The Electric Age picks up where Ironbound left off a couple years back, maintaining the speed and ferocity of that release while throwing in some even more brutal riffs for good measure.” – Outburn Magazine

“Containing more hooks than the average Lamb of God record, this Age is one we wouldn’t mind living in.” – Revolver Magazine

“Sixteen albums in, these dudes are not only still fired up; they’re practicing their craft at the peak of their skills, with no signs of slowing down.” – Decibel Magazine