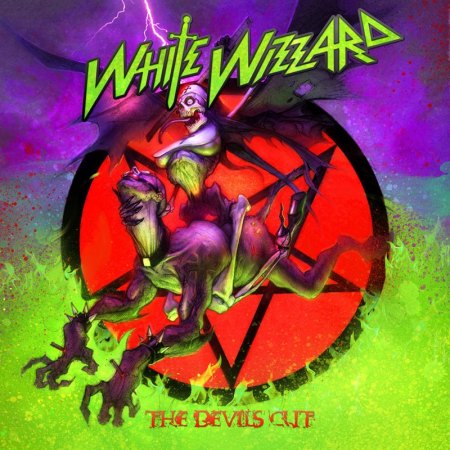 WHITE WIZZARD has launched a new track, “Strike The Iron,” taken from their upcoming third full-length album, The Devils Cut. Due out on June 3rd in Europe via Earache Records and on June 25th in the USA via Century Media/Earache Records, The Devils Cut features artwork by Cameron Davis (http://www.cdavisart.com), who is known for his work as the lead character designer and illustrator for the Guitar Hero video game series.

“‘Strike the Iron’ is my favorite WHITE WIZZARD song I have ever written, along with ‘The Sun Also Rises’, which closes the new record.  I am very proud of the arrangement.  I had the verse melody in my head and chorus line before I even picked up the guitar and started writing it.  It has stunning leads by Jake and Will, and Joseph interpreted the vocal melody fantastically and gave so much character to it.  This song really exemplifies everything this line-up is capable of and everyone’s talents really came through on it.  It never lets up and we are very excited to get this one out there live…I expect it to be our opening song for the next couple of years.”

The previously released album track, “Kings Of The Highway,” can be heard here.

Since their inception in 2007, Los Angeles’ WHITE WIZZARD has stuck to their manifesto of delivering classic, denim-and-leather heavy metal to the masses. Following the triumphs and critical acclaim that accompanied their first two albums, Over The Top (2010) and Flying Tigers (2011), WHITE WIZZARD has now returned with a brand new slab of high-speed heavy metal for this summer. The band’s main-man, Jon Leon, spent months crafting the nine songs that make up The Devils Cut before heading to the studio with a refreshed line-up of musicians to lay down the tracks. The man behind the distinctive vocal chords is Joseph Michael, ably backed up by the shredding might of Jake Dreyer and Will Wallner and the precision drumming of Giovanni Durst– making WHITE WIZZARD one of the most volatile forces in the US heavy metal movement!

3. Kings Of The Highway

4. Lightning In My Hands