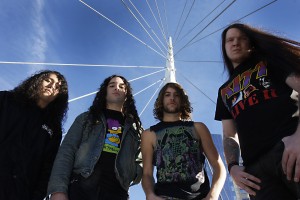 Fans of Denver thrashers HAVOK are beginning to feel the growing excitement for the approaching North American release date of the band’s third full-length, Unnatural Selection. The album’s lead single, “Give Me Liberty… Or Give Me Death,” impacted metal radio earlier this week; the only single to land on CMJ’s Loud Rock “Most Added” report. Sirius/XM Radio plus Syracuse’s WAQX, Baltimore’s WIYY, and Northern New Jersey metal powerhouse WSOU, among others, are a few of the key early supporters of the single.

To celebrate, Candlelight Records today makes “Give Me Liberty…Or Give Me Death” available as a free download at the label’s official Bandcamp page. The topical thrash anthem delivers the young band’s classic thrash and old-school metal sound.

To download click HERE. All available titles at Candlelight’s Bandcamp are available at a 15% discount through midnight June 3. The code to enter on check out is GiveMeCandlelight.

Currently touring Europe with Suffocation and Cephalic Carnage, HAVOK will kick off North American touring just after the June 25 release of Unnatural Selection. Set to begin July 22, the headlining tour will see the four-piece journey through the southern states, travelling up the eastern seaboard before making their debut performance at Montreal’s annual Heavy MTL festival on August 11.

Special preorder bundles of Unnatural Selection are now available via the band’s official webstore. All bundle customers will be automatically entered into a golden ticket contest; one winner will be picked at random to receive an autographed Charvel Guitar and one of everything in the current HAVOK merch store. Candlelight Records will launch a vinyl preorder in the coming weeks. Visit the label’s official Facebook page or follow the label via Twitter (@candlelightusa) for official details.

Produced by Terry Date (Pantera, Overkill, Deftones) and mastered by James Murphy (Testament, Death, Disincarnate), Unnatural Selection bears a far more mature collection of songs when compared to Burn (2009), and Time Is Up (2011). HAVOK has truly hit their mark with a sound that will please fans new and old. The album features ten new songs, including the band’s rendition of Black Sabbath classic “Children of the Grave.”

Confirmed dates on the band’s headline tour plus three special Denver-area performances (a copy of Unnatural Selection included with ticket purchase) are below.