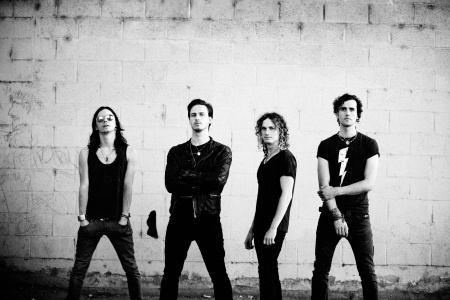 The combustible first single from UK hard rockers Heaven’s Basement, “Fire, Fire,” has begun its ascent up the Active Rock radio charts, blazing to #29 this week, up from the #33 slot last week.  The track is now in rotation at such tastemaker rock stations as WRIF/Detroit, WJJO/Madison, WIYY/Baltimore, KUPD/Phoenix and WKRL/Syracuse.  The video for the single, directed by Michael Maxxis (Ours, Sum 41, and Our Lady Peace), can be seen here and a brand new video featuring live footage can be viewed here.

The hard-working British quartet are currently finishing up an impressive first of tour of the United States including appearances at major rock festivals UFest, Carolina Rebellion, RockFest, Rock On The Range and Rocklahoma, plus a string of club shows supporting Buckcherry and several headline club shows.  The band also headlined the “Aftermath,” the official after party of The Fifth Annual Revolver Golden Gods Awards Show Presented By Epiphone© at the Viper Room in Los Angeles and was a featured presenter at the Awards Show itself the day before.

Heaven’s Basement will return to the UK next week to play this year’s Download Festival, along with other festivals throughout Europe.  Zane Lowe will host Heaven’s Basement alongside Enter Shakari as part of Rock Week with a live performance on BBC Radio 1, where “Fire, Fire” is currently on the “In New Music We Trust” playlist.  The band will attend the Kerrang Awards, where they are nominated for the Best British Newcomer award; they will also perform live at the pre-party for the Metal Hammer Golden God Awards in London later this month.

Heaven’s Basement will next head out on a headlining tour of the UK in July, including an already sold-out show at London’s XYZ club,, followed by more festivals across Europe and the UK, including the Reading & Leeds Festivals.  Additional U.S. dates will follow in the Fall, including KISW’s Pain In The Grass in Seattle on 9/6 and KRXQ’s Aftershock Festival in Sacramento on 9/14.  They will round out the year as main support to Black Veil Brides’ European Tour in November and December.

Heaven’s Basement‘s debut album, FILTHY EMPIRE (Red Bull Records), is in stores now.  Both it and the band have been receiving stellar reviews from the press and fans alike.  Outburn declared, “On the strength of their kick-ass live show, Heaven’s Basement has seen their popularity and profile propel upward like a shot from a flare gun…” while The Aquarian avowed, “With this full-length debut, the band has made an explosive entrance onto the modern rock scene…”  The band was also profiled in both Revolver and Guitar World, with Revolver dubbing them a “Band To Watch.”  FILTHY EMPIRE was produced by John Feldmann (The Used, Papa Roach, Black Veil Brides).

Heaven’s Basement have been making a name for themselves via their relentless touring and fiery live show plus music that features huge guitar riffs, killer melodies and an arena-rock sound.  Originally formed in the East Midlands in England, Heaven’s Basement have also toured with the likes of Black Veil Brides, Papa Roach, Shinedown, Halestorm, Seether and more.  Kerrang declared, “Heaven’s Basement play as if their lives depend on it.  They should already be a big name – bristling riffs and jagged, riotous hooks are their poison and exceptional is not too strong a word.”  Heaven’s Basement is Aaron Buchanan (vocals), Sid Glover (guitar), Rob Ellershaw (bass), and Chris Rivers (drums).