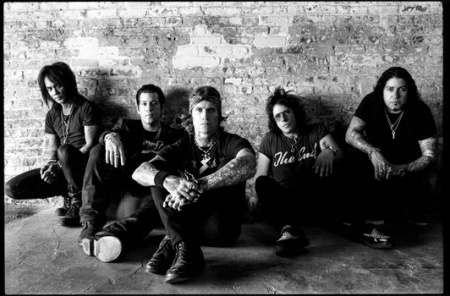 BUCKCHERRY have partnered with Ultimate-Guitar.com to premiere the official music video for their new single “Nothing Left But Tears” and give away an Epiphone guitar autographed by the band. Debuting today, “Nothing Left But Tears” is the first video of BUCKCHERRY’s career to not feature the band in a performance setting – instead, each of the members personifies one of the seven deadly sins… the same deadly sins that inspired the band’s new album ‘Confessions.’

Every fan that watches “Nothing Left But Tears” at the Ultimate-Guitar.com page hosting the video between now and September 13 can enter to win an Epiphone guitar autographed by BUCKCHERRY.

Says Gomez of the ambitious video project: “It opens in a roadside motel where there was a murder-suicide, and the video is the aftermath. Our character comes back from the dead and walks into a tunnel that is the pathway to hell and ends up in an ‘Alice In Wonderland’ meets ‘Dante’s Inferno’ tea party where six of the seven deadly sins are having a party in the middle of the forest – our interpretation of hell.”

Adds BUCKCHERRY guitarist Keith Nelson: “There are so many cool characters in the video, and it’s the first video where we didn’t played instruments, it was a lot of fun to do something different.”

Produced by Los Angeles-based Marco De Molina and his Veva Entertainment Company, a behind-the-scenes featurette shot throughout the making of the video can be seen here: http://www.youtube.com/watch?v=I8nGtSCZUvE

“Nothing Left But Tears” is the second single from ‘Confessions,’ BUCKCHERRY’s debut release on Century Media Records. The album was released earlier this year and has sold more than 50,000 copies on the back of hit single “Gluttony” (watch the video here). The band remain on the road all summer, culminating in an appearance at the Monster Energy Aftershock festival September 14, where they share a stage with fellow heavyweights KORN, AVENGED SEVENFOLD, FIVE FINGER DEATH PUNCH, VOLBEAT, IN THIS MOMENT and more.

* with GIRL ON FIRE in support