Eye Empire has built a following through unwavering perseverance.  They are true road warriors, sacrificing the comforts of home with an unwavering belief in the dream.  Over the past several years, the band has staged more than 800 performances building a community that has rallied around the mantra “Love, Respect, Support.”  On October 29, the next chapter begins with the release of EVOLVE. 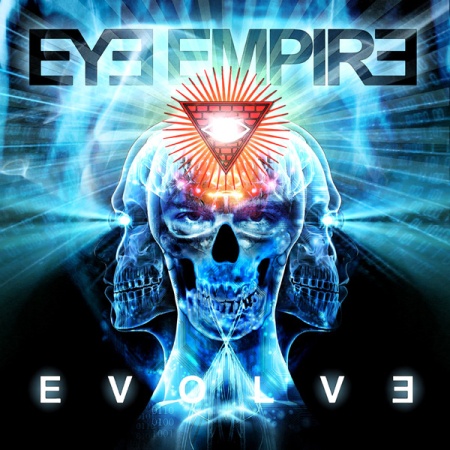 AND OFFER “THE WAR ISN’T OVER YET” AS GRATIS DOWNLOAD

In gratitude to fans across The World, the band has placed the song “The War Isn’t Over Yet” on-line as a gratis download.  The band welcomes sharing, and re-posting of the track across the universe, but does request accompanying usage of the album cover.  The composition can be downloaded here: http://www.hightail.com/download/OGhmYkJpVnMwMEZFQmNUQw

Corey Lowery (Stuck Mojo / Stereomud / Dark New Day), B.C. Kochmit (Switched), Donald Carpenter (Submersed) and Ryan Bennett (Texas Hippie Coalition) all have seen success in the past through other ensembles.  With the formation of Eye Empire however, they have proven a commitment to seeing through what they started.   Lowery remembers, “BC and I started playing together when he was in Switched, and I knew that he would be the guitar player that I would one day create something special and lasting with.  He has a great sense of melody with rhythm and solos and a great understanding of arrangement and what’s best for the song. He knows the difference between shredding and holding one note, and making that one note sing. He truly has his own style as an artist.”  He continues, “with DC, when I met him on Halloween four years ago, from the first note he sang, I knew he was something special. He treats his voice like an instrument, always focused, pushing himself to finding new voices with each song. Lyrically, he believes in what he is singing. Never preaching, but expressing what he’s been through or seen in his life on the road.  And lastly with the youngest member of the quartet Ryan Bennett, Lowery reflects, “Simply one of the baddest drummers to come to the rock ‘n roll scene in years. Grabbing some of his favorite drummers and making his own style with Eye Empire. He’s the guy that is always smiling staying positive until he gets behind the drums then he explodes.”

Musically, they have established a connection that has witnessed an organic swell.  Audiences have grown, and the band is now a bona fide headliner.  It has everything to do with chemistry.  They push one another to stay fresh.   Thus, the chosen title of EVOLVE for the upcoming album which follows the band’s independently released debut IMPACT.  As Carpenter shares, “I am deeply connected to this story.  You truly have to live by your heart and trust that life will lead you in the direction you are needed. I believed and it led me to Eye Empire. I will never take that for granted.”

The pre-order for physical goes live Monday, October 21st at www.eyeempire.storenvy.com/ while the album will be available via all digital retailers worldwide on October 29.  Eye Empire continue to tour steadily, with the following confirmed appearances scheduled (Direct Support is Mindset Evolution on most dates):

The War Isn’t Over Yet

The Man I Am